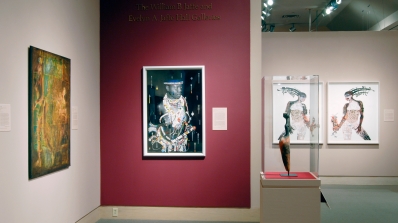 "In many cases, my identity has been "made" for me . . . The self is explored as an ongoing process of construction in time and place . . . reflect[ing] a desire to present myself in various ways to counter the image that has been imposed on me." —Berni Searle

The most detailed investigation of this theme to date, Black Womanhood presents over one hundred sculptures, photographs, prints, paintings, and installations by African, European, American, and Caribbean artists. Displayed in three separate but intersecting sections, these objects present traditional African, Western colonial, and contemporary global perspectives on the subject. Linked through the common themes of beauty, sexuality and fertility, maternity and motherhood, and identity and social roles, this tripartite organization allows each moment in time and each cultural milieu to tell its own story. Taken together, they peel back the entangled layers of cultural, racial, and gender politics that have informed Western perceptions of black womanhood from the nineteenth century to the present.

"I have been preoccupied with questioning and unseating perceptions of desire, attraction, sexuality, sensuality, and beauty, as all these are both subjective and ever changing. These aspects are interpreted in varying ways and cannot be condensed to one acceptable viewpoint. The subjective nature of individual interpretations and experiences, and how this influences life in general, has always been central to my production." —Nandipha Mntambo

When I first began conceiving Black Womanhood: Images, Icons, and Ideologies of the African Body, I was asked why this, why now, and especially why the combination of traditional African, colonial, and contemporary representations of the black— mostly unclothed—female body? Working as an Africanist for more than a decade, I had observed a growing dialogue between long-standing African art traditions and new developments in contemporary African and Diaspora arts. In more recent years, the rise of feminist voices among these contemporary artists revealed their growing interest in understanding the impact that historical images have on their own (and their viewers') responses to images of the black female body. Although feminist researchers have examined these issues in various publications on race and gender since the 1980s, the subject has for the most part evaded exhibitions of traditional African, Western colonial, and contemporary global art.

"This whole notion of the disappeared, I think, is something that runs through my work. I'm very interested in absence and presence in the way that particularly black women's experience and black women's contribution to culture are so often erased and marginalized. So that it's important for me as an individual, and obviously as a black woman artist, to put black women back in the center of the frame—both literally within the photographic image, but also within the cultural institutions where our work operates." —Maud Sulter

As an exhibition, Black Womanhood therefore treads on new and difficult terrain. While some visitors might be familiar with traditional African representations of womanhood only through figurative sculpture, others may never have questioned the fact (or fiction) of colonial representations of Africa's women. For yet others, the very notion of placing contemporary art together with historical art may seem contradictory, as seldom do these two categories share the same space. However, as I hope to demonstrate through the exhibition, representations and perceptions of black womanhood are as much grounded in and intersecting with tradition and history or art and ethnography as they do with contemporary life and society.

"I can't be complacent about the world I live in. . . . It's important to me to use art in a manner that incites people to look and then carry something home—even if it's subliminal—that might make a change in them." —Joyce Scott

Notions of black womanhood have been constructed differently over time and across cultures but are often interconnected in unexpected ways. For example, since the end of the nineteenth century the Mangbetu woman, with her elongated forehead and halo-like coiffure, has been an icon of the seductive yet forbiddingly exotic beauty of the African woman. This is due as much to the Western colonials who portrayed the beauty of Mangbetu women in widely disseminated photographs and postcards as to innovative Mangbetu artists who capitalized on this European fascination by sculpting female heads onto their otherwise non- figurative arts. Today, contemporary artists such as Magdalene Odundo and Carrie Mae Weems are recycling these very same historic images of the Mangbetu woman to suggest new ways of thinking about and reading these colonial-era depictions. While Odundo, who was born in Kenya, creates ceramic sculptures that celebrate the enduring beauty of Mangbetu womanhood, her highly abstract vessels point also to the cultural specificity of ideals of beauty. American artist Weems, on the other hand, critiques the exploitative nature of colonial-era photography by manipulating a famous photograph of the Mangbetu woman Nobosodru and images of African American slaves in her photo-based installation From Here I Saw What Happened . . . and I Cried. Without some acquaintance with the ideologies, histories, and meanings inscribed into the Mangbetu imagery and the colonial obsession with Mangbetu beauty and sexuality, the poignant messages embedded in Odundo's and Weems's work cannot be fully embraced.

"Living as an African woman in a Western world has developed in me a strong need to consistently focus on the African self-image. My images express a part of myself; they develop a personal view free from all anthropological, ethnographic, exotic, and romantic blemishes of the colonial era and media that are embedded in the Western consciousness. . . . In the mystery that the body in general represents—and the black body, in particular, with its own codes—I am using stereotypical images and clichés in my work to give back the bodies and faces their independence, freedom, strength, and pride—and their awareness too. It is a need, a call to immortalize the black woman, and to celebrate her inner and outer beauty. . . . Aesthetics is my instrument to attract attention and enable the viewer to see beyond [stereotypical] forms and familiar references." —Angéle Etuondi Essamba

A single exhibition could not feasibly present the whole gamut of images of the black female body in Western and African art history. However, a selection of particular works created within different cultural, social, and chronological contexts, such as those featured in Black Womanhood, can indeed demonstrate that multiple, overlapping, and at times contradictory perspectives co-exist.The manner of presenting three different perspectives thereby throws into question the "truths" and uncontested "histories" that charged images of the black female body carry within them.

"My self-portraits were initially informed by the history of portraits made by male photographers of their wives, lovers and muses . . .Turning the camera on myself I sought to capture the intimacy of those unguarded moments . . . I realized that my body could never be simply formal, or emotional, or personal. Most viewers would always see a black body regardless of my intent . . . Through juxtapositions of nineteenthcentury images and texts on racial differentiation and categorization with contemporary self-portraits, I hope to suggest to the viewer that such precedents, while seemingly absurd and outdated, still contain a great deal of resonance and power with respect to the way that we read and respond to contemporary images of African American women." —Carla Williams

The first section, "Icons, Ideals, and Ideologies of Womanhood:The African Perspective," presents a selection of African art created within the traditional cultural setting. The scholarly literature (and past museum exhibitions) generally approach expressions of womanhood in African art via the analysis of the female form in iconic and mostly figurative sculptures that, due to the widespread gender division of labor in Africa, are made primarily by and for men. This has left little room for understanding the role of the mostly abstract and non-figurative representations of womanhood made by and for African women. The combination of male and female arts and perspectives therefore presents a more balanced view of how cultural and gender-specific ideologies are conveyed differently by men and women through the traditional arts that continue in some cases to play a role in defining womanhood in Africa today.

"Females carry the marks, language, and nuances of their culture more than the male. Anything that is desired or despised is always placed on the female body." —Wangechi Mutu

In more recent years, cultural and gender scholars have scrutinized how colonial images of African women—specifically the unclothed black female body—were especially mysticized, exoticized, and sexualized. Such studies have provided us with forceful and often disturbing evidence of racist ideologies that informed the making of such images. Rising to the challenge of re-interpreting colonial narratives of black womanhood, the second section, "Colonizing the African Woman: The Western Imaginary," features a selection of vintage postcards and other widely reproduced media. Created by both Western and African image-makers, these works provide evidence of the representation of Africa's women simultaneously as "primitive" and "modern."

"As a woman and an artist, I find myself part of a community that in the nineteenth century began to assert its historical and artistic presence and confront (mis)representations by others. Colonial depictions of women have bequeathed an artistic legacy to the "West" that has [been restricted to] the types of images that fill museums and art books. It is only in the second half of the twentieth century that these images have been critiqued in the social sciences and humanities. In the twenty-first century, the voices of women artists have also joined in, insisting on their multiple identities. I insist on my multiple identities and demand that all of my identities be respected— be they geographic, cultural, faithbased, or artistic—since they demonstrate that I am part of a cosmopolitan world with its joyous and sorrowful aspects." —Lalla Essaydi

The third section, "Meaning and Identity: Personal Journeys into Black Womanhood," features works by contemporary African and African-descended artists who consciously recycle and critique the very same images, icons, and ideologies presented in the historical sections. While some of these artists build upon the foundations laid down by former feminist and black art movements, others are creating new visual narratives that arise from the multicultural and transnational experiences of today's global society. Contributing their personal perspectives to this fraught yet inspiring arena are African-based artists such as Emile Guebehi, Senzeni Marasela, Zanele Muholi, Penny Siopis, and Malick Sidibé, African and African-descended artists based in Europe such as Hassan Musa, Sokari Douglas Camp, Etiyé Dimma Poulsen, and Fazal Sheikh, African American artists such as Renée Cox and Kara Walker, and the American-based Cuban artist Maria Magdalena Campos-Pons.

It is our sincere hope that the art and perspectives presented in Black Womanhood will generate further questions and promote debate about how meaning has been and continues to be inscribed upon the black female body. Certainly we are all familiar with popular and often stereotypical images of black womanhood as they appear on television and in the movies, music videos, news, popular magazines, and the Internet. But how often do we actually stop to question the forces that inform our reading and consumption of these images? The artistic voices and visual narratives in Black Womanhood seize this moment to reflect upon these forces and to promote the revision and reclamation of power, voice, and choice over the imaging—and imagining—of the black female body in art and society today.