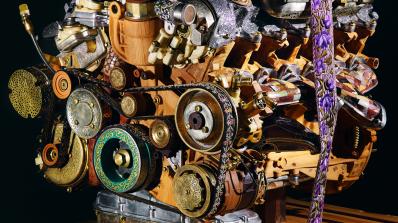 Successive African art curators at the Hood Museum of Art have assembled an extraordinary and holistic vision of the arts of Africa that encompasses both important historical milestones and the multiple cultural and social vistas of this continent. Acquired over the past two years and on view together for the first time, these thirty-one exceptional objects map the contour of modern and contemporary African art from the 1960s to the present while also shedding critical light on the diversity of African artistic practices by multiple generations of artists. The installation includes an exciting array of paintings, photographs, sculptures, drawings, ceramic, and mixed media, including works by Ibrahim El Salahi, Lamidi Fakeye, Akin Fakeye, Owusu-Ankomah, Victor Ekpuk, Chike Obeagu, Candice Breitz, Nomusa Makhubu, Julien Sinzogan, Aida Muluneh, Halida Boughriet, Mario Macilau, Eric van Hove, Khulumeleni Magwaza, and Nidhal Chamekh.

This exhibition was organized by the Hood Museum of Art and generously supported by the William B. Jaffe and Evelyn A. Hall Fund.

"The Life and Legacy of Ota Benga"

“What Is Contemporary African Art?”