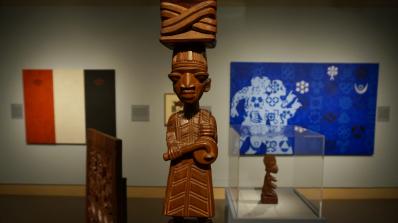 Made in the Middle

November 15, 2014, through March 15, 2015
Constructing Black Identities across the African Diaspora

Cultural anthropology began as the study of people—primarily in Africa—whom Europeans had defined as exotic, primitive, and uncivilized, but many later ethnographic studies debunked this colonial mindset. Today’s anthropologists aim to reveal the social, historical, and political construction of racial identities. The works of art in this small exhibition further this effort. They represent a host of colonial binaries—culture and civilization, traditional and modern, savage and civilized, rest and west, black and white—that often serve to perpetuate systems of inequality rather than understanding of our shared humanity. Taken together, the artists here reveal the difficult positions in which people of color find themselves when trying to simultaneously conform to standards upheld by white western society and recuperate a relationship to Africa or blackness. Yet the images expose not only the potential hurt but also the excitement of crafting hybrid identities from various cultures.

Chelsey Kivland, Robert A. and Catherine L. McKennan Postdoctoral Fellow of Anthropology, and Amelia Kahl, Hood Museum of Art Coordinator of Academic Programming, selected these works for Professor Kivland’s Introduction to Cultural Anthropology class. Students in the class wrote descriptive labels for these works and used them for a visual anthropology assignment.

This exhibition was organized by the Hood Museum of Art, Dartmouth College, and generously supported by the Harrington Gallery Fund.