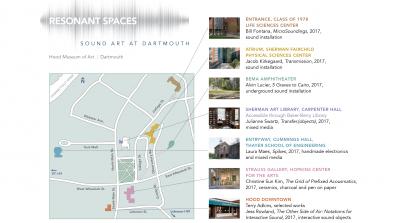 Temporary Exhibitions, Hood Downtown, Strauss Gallery, and other locations around the Dartmouth campus

In the first-ever installation of sound art on Dartmouth's campus, produced in collaboration with guest-curator faculty member Spencer Topel, the Hood Museum of Art will showcase the work of emerging and established international artists with diverse aesthetic and cultural backgrounds. Seven site-specific and sound-based commissions will guide visitors across the Dartmouth campus and into the town of Hanover. Hood Downtown will feature a multimedia display introducing the exhibition and artists, as well as selected works from conceptual artist Terry Adkins (1953-2014). Artists creating new installations for the show include Bill Fontana, Christine Sun Kim, Jacob Kirkegaard, Alvin Lucier, Laura Maes, Julianne Swartz, and Jess Rowland.

As diverse a medium as bronze or oil paint, sound can be recorded from the environment or produced from an object, sculpture, instrument, or living being. It can be responsive to installed spaces or autonomous, continuous or intermittent, loud or soft. Artists were invited in part for the compelling ways they use sound through conceptual, visual, and architectural contexts. Resonant Spaces alters locations in Hanover by encouraging visitors to experience the world transformed through sound.

This exhibition was organized by the Hood Museum of Art, Dartmouth, and generously supported by the George O. Southwick 1957 Memorial Fund, the Eleanor Smith Fund, the Department of Biological Sciences, the Thayer School of Engineering, and the Danish Arts Foundation.

"A Feast for the Ears at the Hood Downtown: Jess Rowland," dailyUV