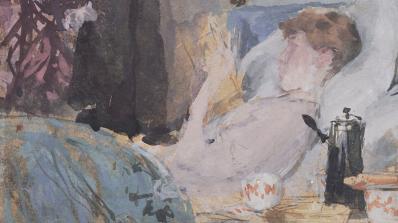 This exhibition celebrates the recent gift from Hanover resident Philip H. Greene of thirteen works by the California-style watercolorists.  The mostly southern California artists who made up this informal but close-knit group were most active from the late 1920s through the 1950s.  They achieved national recognition for their generally large-scale watercolors painted with broad, saturated washes in a manner that was bold and expressive, yet representational.  Among the best known of the group were Millard Sheets, Phil Dike, Rex Brandt, Barse Miller, Emil Kosa Jr., and, from northern California, Dong Kingman.  Just as their regionalist contemporaries Grant Wood and Thomas Hart Benton portrayed traditions associated with everyday life in the rural midwest, these artists celebrated their West Coast environs through images of the state's dramatic coastline, agricultural and fishing traditions, public amusements, and bustling cities.  While many of the artists seem to pay homage in their work to a way of life that was disappearing in the face of urban development, others convey in their watercolors an appreciation for the modern Southland cityscape.  In keeping with the populist, nationalistic mood of the era, these artists captured unpretentious, recognizably American subjects that transcended their regional content and appealed to audiences from coast to coast.

This exhibition was generously supported by the Bernard R. Siskind 1955 Fund and the Hansen Family Fund.