This map documents each of the sound art installations across the Dartmouth campus and in the town of Hanover. 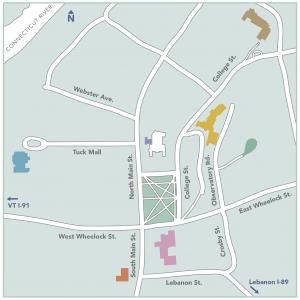 Click the image above for a PDF of the exhibition map.

On September 22–23, 2017, six of the seven living artists featured in Resonant Spaces gathered on campus for a symposium that included artist presentations and a roundtable discussion moderated by co-curator Spencer Topel. Exhibition artist Bill Fontana gave his presentation remotely. Paula Matthusen, sound artist and professor of music at Wesleyan University, contributed to the roundtable and also hosted a walking tour of the exhibition.

Teaching with the Exhibition

Resonant Spaces: Sound Art at Dartmouth reached across the Dartmouth curriculum and deep into the community through visits from both College classes and local schools.

Dartmouth classes that visited Resonant Spaces or spoke with one of the artists include:

Anthropology 50.20, Music 17.5, The Poetics and Politics of Sounds and Words, Yana Stainova
Amelia Kahl provided an introduction to the work of Terry Adkins, Jess Rowland, and Christine Sun Kim.

Environmental Studies 15, Environmental Issues of the Earth’s Cold Regions, Ross Virginia
While on campus for the Resonant Spaces symposium, Jacob Kirkegaard spoke about his time recording glaciers for his piece Melt, and discussed his work Transmission.

French 3, Intermediate French, Kelly McConnell
Students completed a “scavenger hunt” of Resonant Spaces. They created videos and texts en français sharing their thoughts about the installations, and uploaded these projects to a class Google drive. Students also completed a reflection exercise on the exhibition.

Music 34, Sound Art Practice, Spencer Topel
During the spring 2017 term, visiting conceptual and sound artist Christine Sun Kim spoke with the class about her work and career. Kim was in Hanover creating ceramics and drawings for Resonant Spaces.

During the fall 2017 term, students toured the exhibition Resonant Spaces with co-curators Spencer Topel and Amelia Kahl. They used the show as a basis for their study of sound art throughout the term.

Music 40.2, Nineteenth-Century Music, Richard Beaudoin
This class was looking at visual representations of Beethoven in the Music Department, and ended their tour with Terry Adkins’s work Synapse (Black Beethoven), which was on display as part of Resonant Spaces. The class watched several cycles of Synapse before discussing the work, along with several other Adkins pieces in the room. Professor Beaudoin reported that the Adkins work was a moving culmination of their study of 19th-century music in the contemporary world.

Studio Art 15, Drawing I, Karol Kawiaka
After a brief introduction to Resonant Spaces, students spent the majority of the class time drawing from the work of Terry Adkins and Jess Rowland.

Studio Art 65, Architecture I, Zenovia Toloudi
Amelia Kahl gave a partial tour of Resonant Spaces. The group looked at works that integrated sound and space or architecture, including Alvin Lucier’s 5 Graves to Cairo in the Bema, Jacob Kirkegaard’s Transmission in the Fairchild atrium, Bill Fontana’s MicroSoundings at the Life Sciences Center, and Laura Maes’s Spikes at Cummings Hall.

Hundreds of schoolchildren participating in Images and ArtStart, the Hood’s multiple-visit programs, enjoyed the challenge of engaging with sound art—particularly the interactive works in the exhibition. “Performing” a work of art gave students the opportunity to engage in artistic thinking and experience the joy of creating sound. Months after their visit, many cited this lesson as the most impactful of the year.

Students were asked to write and draw about their favorite work of art they encountered during a year of visits to the Hood. Below is a selection from the responses relating to Resonant Spaces. School groups experienced the work of Jess Rowland and Bill Fontana during their visits.

Early in the process of planning the sound art exhibition, we decided to present the works in discrete locations around the Dartmouth College campus. We felt that a shared exhibition space would yield a weaker result due to mixing of the sound from different works. We also believed using a single site would potentially restrict the creativity of the artists, as well as the reception of their work. Instead, we provided artists with dossiers of potential locations, including reference recordings of the ambient environment and site plans. Recognizing that light and sound pollution are often major concerns in architecture and public spaces, we also provided a noise restriction plan indicating the relative loudness scale for each hour of the day, created in consultation with the constituents responsible for or occupying each of the sites. We then tasked the artists with ranking the sites in order of preference and, following individual site visits to their top three choices, they selected the locations for their works.

View a sample dossier for one of the sites.

“A Feast for the Ears at the Hood Downtown: Jess Rowland,” dailyUV