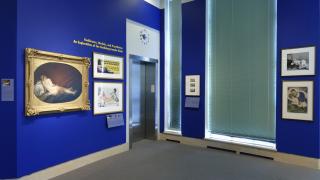 An Exploration of the Reclining Female Nude

Goddesses, Models, & Prostitutes
July 18, 2015, through August 30, 2015
The reclining female nude has been a recurring theme in Western art since the 1500s. It began with erotic images portraying an idealized woman (often in the guise of a goddess) for the pleasure of the male viewer. Through her passive, reclined pose, she offers her body for our gaze; her recumbent nudity implies that she is sexually available. She represents sensuality, beauty, and desire. As the subject of the female nude became canonized, artists began to expand the ways in which it was represented. She can be depicted alone or with guests and companions. With each incarnation of the reclining female nude, the tradition continues to grow and change.

Water Ways
April 04, 2015, through August 23, 2015
Water is essential to human life, shaping the geography of human settlement, modes of travel, and ease of trade. Too much water (flooding) or too little (drought) has wrought havoc in communities for millennia. This exhibition considers humans' relationship to water, from the architecture of socialization pictured in Edward Burtynsky's photograph of a stepwell in India to the dramatic effects of flooding shown in images of people in front of their homes from Gideon Mendel's series Drowning World. From quiet still lifes (David Goldes) to panoramic landscapes (Ian Teh), these photographs showcase the beauty and power of this miraculous, yet quotidian, substance.

Auto-Graphics
April 18, 2015, through August 02, 2015
Nigerian-born artist Victor Ekpuk is best known for his improvisational use of nsibidi, a form of ideographic writing associated with Ekpe, the powerful, interethnic men’s association active in the southern border regions of Nigeria and Cameroon. Though familiar to him since his childhood, Ekpuk’s aesthetic engagement with nsibidi emerged during his fine art studies at Obafemi Awolowo University in Ife, Nigeria, where students were encouraged to explore the logics of pattern and design in indigenous African art forms. Ekpuk’s fascination with nsibidi during these years—its economy of line and encoded meanings—led to his broader explorations of the visual properties of linguistic signs and to the invention of his own fluid letterforms. As a mature artist, Ekpuk has so internalized the rhythm and contours of his “script” that it flows from his hand like the outpouring of a personal archive.

Ukara cloth symbolizes the power, wealth, and prestige of the Ekpe secret society, an interethnic all-male association, and the sacrality of Ekpe meeting lodges. Although commissioned and used by the Ekpe, located in the Cross River region at the border of southeastern Nigeria and western Cameroon, ukara is designed, sewn, and dyed by the Ezillo people in present-day Ebonyi State. The process of creating ukara cloths is laborious and involves many hands, but ultimately each cloth is highly individualized, clearly produced to be worn by a specific Ekpe person or to mark a particular Ekpe lodge. Nsibidi symbols, an ideographic and gestural system of communication, are dyed onto the cloth. The symbols’ meanings are largely guarded by Ekpe members, with more established members becoming deeply knowledgeable about the poly-semantic signs.

Organized in collaboration with Studio Art majors from Dartmouth's Class of 2015, this exhibition explores the continued relevance and global diversity of self-portraiture in contemporary art. While self-portraiture has traditionally engaged with direct observation and autobiography, contemporary artists have begun to question the value and integrity of authorship and a coherent artistic identity through the use of disguise, impersonation, and assumed personae.

Abstraction comes from many different sources. It may begin with a concrete object, or something less tangible, such as an emotion or thought. Artists use abstraction to express that which cannot be conveyed through representation and to explore other sources of art-making. The works in the exhibition date from immediately after World War II until the present. Some were strongly influenced by abstract expressionism, and others stem from later movements, such as minimalism and conceptualism. This exhibition highlights three important sources of abstraction: gesture, emotion, and shape.

This exhibition was curated by Philip Dytko, Class of 2017, Pauline Lewis, Class of 2016, and Molly Siegel, Class of 2016, each of whom was enrolled in Professor Mary Coffey’s ARTH 71: The American Century. This course provides a thematic overview of American art in the twentieth century. Students in the class were placed into curatorial teams of three, and each team identified a theme, selected six objects from the permanent collection, drafted labels, and proposed an installation design for the exhibition. The teams presented their proposals to the entire class at the end of the term, and students voted on their favorite. Gesture, Emotion, Shape: Sources of Abstraction was the winning exhibition.