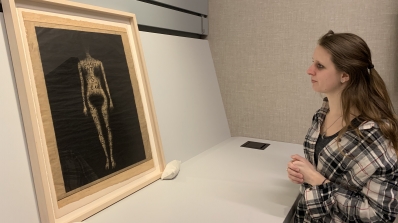 on the Hood's blog "Meanwhile at the Museum"

"The program represented hands-on, experiential curatorial training that is rarely afforded to undergraduates."

In 2001, the Hood Museum of Art pioneered the A Space for Dialogue program. For the first time, students would be given full curatorial control of their own exhibitions. With the mentorship of the staff, Hood interns would choose the theme of the exhibition, select and research objects from the museum's collection, write wall text and a brochure, choose wall colors, frames, and object placement, and give a public talk. The program represented hands-on, experiential curatorial training that is rarely afforded to undergraduates.

I had the privilege of curating the first A Space for Dialogue exhibition. Having graduated only a few months earlier, I was working at the Hood as a curatorial/programming assistant. The opportunity was intimidating. As I went through storage, I became fascinated with the idea of mimeticism in art, choosing a realistically carved wooden geranium sculpture and two botanical drawings. I learned a lot through the process, but it never occurred to me that many years later I would be working at the Hood and supervising the interns as they created their own A Space for Dialogue exhibitions.

Over the past twenty years, Dartmouth students have created an incredibly wide range of exhibitions with titles such as Sexes in the City: Exploring Urban Men and Women through Five Centuries of Popular Prints (Megan Fontanella '04), The Art of Drinking: Four Thousand Years of Celebration and Condemnation of Alcohol Use in the Western World (Ben O'Donnell '08), RIOT: Feminist Protest Art (Julissa Llosa '10), and Black Bodies on the Cross (Victoria McCraven '19). May 2021 marked the 100th A Space for Dialogue exhibition. (And while the museum was closed during the pandemic, ten students created virtual exhibitions as well.) In all, 587 objects have been on display as part of this series. I had the opportunity to speak to the 100th student, Kensington Cochran '20, Conroy Intern. Her exhibition The Soul Has Bandaged Moments was on view March 6–May 16.

Amelia Kahl (AK): Can you tell me about choosing your topic?

Kensington Cochran (KC): I have really enjoyed this opportunity because it's allowed me to combine my two passions at Dartmouth, neuroscience and art history. And focusing on PTSD made sense in that it ties into so much of my previous work. Working on the pharmaceutical side, we're working on a treatment for this disease. We've been working on this for seventy years and not been able to find it, and art has been able to reverse the physical and biochemical effects of PTSD without us understanding why. So, in this frustrating process of research and trying to find the answer, art already has it.

AK: Can you talk a little about the title of your show?

KC: I found one piece. It's a Lesley Dill and the title is The Soul Has Bandaged Moments, and that title just stuck with me. I felt like it articulated what I was trying to say—it speaks to the physicality of psychological illness and injury. But it also has this element of hope in it. Then I found out it was actually the title of an Emily Dickinson poem, and luckily we have an Emily Dickinson expert in our English department, so I sat down with Ivy Schweitzer and I learned a lot. What an amazing opportunity to reach out to experts in the field and have them immediately jump into it.

Click here to read the full interview on the Hood Museum's blog Meanwhile at the Museum.