Look and Listen | Landscapes of Sound

Experience the Hood Museum's collection in new ways while wandering the galleries and listening to music. Jules Wheaton '19 paired four landscape and landscape-inspired works with songs. 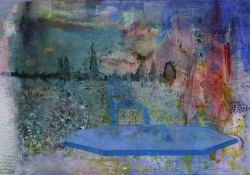 Escape into Bahar Behbahani's otherworldly garden while listening to Passion Pit's "For Sondra (It Means the World to Me)." The increasing intensity as the song progresses push you further into the Garden Eram. The song's tones come in waves, like the layers of flora in Behbahani's work; she describes her process as "meditative," which evokes the still moments in "For Sondra."

Henry Ossawa Tanner, Étaples and the Canche River at Dusk 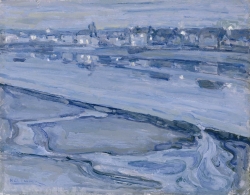 The soft and melancholy emotion of Erik Satie's "Gnossienne No. 1" played by Alexandre Tharaud complements the soft curves and varied blue tones in Étaples and the Canche River at Dusk. The two pieces can interact in tension and harmony to evoke the French artistry around the turn of the 20th century that might have inspired artists like Tanner to travel and capture the beauty of France.

Image: Henry Ossawa Tanner, Étaples and the Canche River at Dusk, about 1918, oil on paperboard.

Matta, A Pinch of Earth 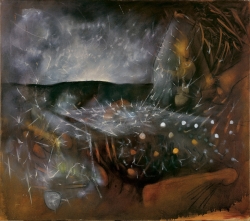 The reverb in "How Soon Is Now?" by the Smiths aurally mimics the electric energy Matta creates and captures in A Pinch of Earth. The white marks dance around the canvas like the melody in these verses and choruses. 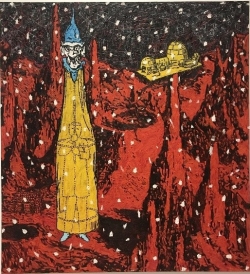 Root yourself in "Without Me" by Rayland Baxter while getting lost in Jane Hammond's otherworldly landscape. A figure standing shrouded in the disguise of another person mimics the shape of the sharp red stalagmites on the ground on which they stand. Baxter sings of not wanting to be alone, then realizes he isn't, thanks to his inability to separate himself from his memories.

"Look and Listen" is a student playlist project. Think of how your own favorite songs could fit with a work of art and share with us on any social media platform by tagging @HoodMuseum or using the hashtag #HoodMuseum.

Written by Jules Wheaton '19, Levinson Intern for Campus Engagement at the Hood Museum of Art in 2018-19