SYMPOSIUM | Art, Artists, and the Museum: A Conversation

On May 3, 2019, the Hood’s second major reopening event will celebrate numerous artists whose work is featured in the galleries.

FREE AND OPEN TO ALL.

Please let us know if you plan to attend. Drop in for any or all of it!

The new Hood Museum of Art will hold its second major opening celebration on May 3, 2019. Art, Artists, and the Museum: A Conversation will feature numerous artists whose work is currently on view in the galleries. Through their presentations and dialogues, we will gain insight into both their individual practices and the contemporary art world more broadly. The invited artists will speak on their own work and creative evolution and then join discussions on four broad themes.

The day will begin with a panel titled Global Contemporary Art—an idea that today has drawn more attention than it has clarity of definition. We often find that as art becomes global in scope, it simultaneously becomes ever more rooted in local traditions. As opposed to the idea of an international style, which supposes a universal set of aspirations that transcends regional dialects or concerns, much of the art we associate with a “global” view revels in ideas, images, and ideals that emerge from distinctive social geographies. Artists addressing this subject include Lalla Essaydi, Jeffrey Gibson, and Sin-ying Ho.

Our second session focuses on the many ways that photography as a medium has reshaped contemporary art practice. Called New Photographies, this panel addresses the need to allow the medium its complexity. We simply cannot speak of “photography” today with the expectation that the term offers much practical specificity. Practitioners now work in such a broad range of techniques and approaches that we can more accurately think about this as a pluralist medium: photographies. Joining the discussion will be Markus Brunetti and Cara Romero.

For Painting Now we have asked our third panel of artists—Bahar Behbahani and Jane Hammond—to consider how each one’s practice of painting has shaped, and been shaped by, their creative goals. We will explore the paradox of innovation and tradition in a medium buried and resurrected with increasing frequency in the art-critical world. While marked by a shared embrace of color, texture, and form, the work of these artists reflects quite different aims and subjects.

The concluding session, Art and Social Justice, addresses a topic at the core of the Hood’s collecting aspirations. The museum seeks relevance through responsiveness to the world around it. The artists on this panel, Morehshin Allahyari, Alison Saar, and Hulleah Tsinhnahjinnie, individually and collectively address the concerns of large swaths of the population, from racism to environmental justice. All three of them confront history and the present with equal insight.

At the end of the day, the participating artists will gather with our curators in the museum for informal discussions of the new installations at the museum—an invitation for our community to join in the dialogue. 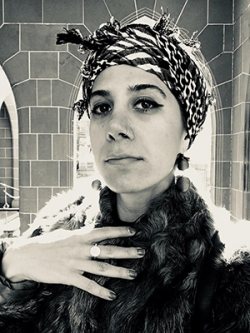 MOREHSHIN ALLAHYARI, born 1985 in Tehran, Iran, is a media artist, activist, educator, and curator who uses computer modeling, 3D scanning, and digital fabrication techniques to explore the intersection of art and activism. Inspired by concepts of collective archiving, memory, and cultural contradiction, Allahyari’s 3D-printed sculptures and videos challenge social and gender norms. Her work has been exhibited throughout the world, including at the Whitney Museum of American Art, New York; Centre Pompidou, Paris; and Museum für Angewandte Kunst, Frankfurt. Allahyari’s recent accolades include a joint commission from the Whitney Museum of American Art, Liverpool Biennale, and FACT; a Rhizome Commission; and a residency at Pioneer Works in Brooklyn, all in 2018. Allahyari received her BA at the University of Tehran, an MA at University of Denver, and her MFA at the University of North Texas. She lives and works in Brooklyn, New York. 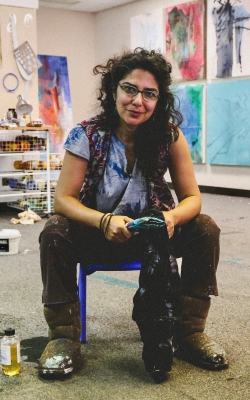 BAHAR BEHBAHANI was born 1973 in Tehran, Iran. Her research-based practice approaches cultural landscapes as a metaphor for politics and poetics through a dazzling combination of representation and abstraction in painting, as well as in video and performance work. Behbahani was featured in a solo exhibition at Hood Downtown, Let the Garden Eram Flourish, in 2017. Her work has been exhibited in the Thomas Erben Gallery in New York, the 11th Shanghai Biennale, the 7th Moscow Biennale, the 18th Biennale of Sydney, and Sharjah Biennial 10, among many others. Her recent honors include both a fellowship at the MacDowell Colony, Peterborough, New Hampshire, and an Open Sessions fellowship at the Drawing Center, New York. She is a 2019 Creative Capital awardee. Behbahani received her BFA and MFA from Tehran University of Art. She lives and works in New York. 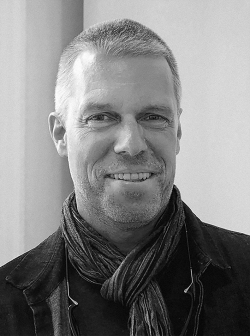 Born in 1965 to a family of builders and architects, MARKUS BRUNETTI grew up in Bavaria and studied in Munich. In the 1980s he embraced the emerging field of digital photography, and he ultimately developed a unique method of layering images. In 2005 Brunetti and his partner, Betty Schöner, began a journey across Europe in their self-built expedition truck. Through this ongoing “Grand Tour,” they have developed FACADES, a project featuring lavishly detailed portraits of sacral buildings representing a variety of European architecture styles. These large-scale digital composite images take years to produce and yield depictions of monuments, both iconic and obscure, that are at once hyperreal and idealized. The first solo exhibition of the series was presented at the Museum of Applied Art, Köln, in 2014, and the project continues to travel to museums and galleries across Europe, North America, and Asia. 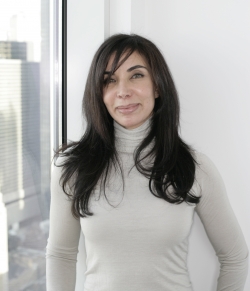 Crossing boundaries and expanding ideas of physical and social space are not new challenges for LALLA ESSAYDI; she has lived in fundamentally divergent cultures. Born in 1956 in Marrakech, Essaydi grew up in Morocco and now resides in New York. She works in a range of media, including film, video, photography, painting, and installation, creating art that combines Islamic calligraphy with representations of the female form. Borrowing from and reimagining Orientalist imagery, Essaydi challenges stereotypes to address the complex reality of Arab female identity from the unique perspective of personal experience. Her work has appeared in dozens of solo exhibitions around the world, from North America and Europe to the Middle East and North Africa, and is held in numerous public collections. Essaydi attended classes at l’École des Beaux Arts, Paris, and later received her BFA from Tufts University and her MFA from the School of the Museum of Fine Arts, Boston, and Tufts.

Born in Colorado in 1972, JEFFREY GIBSON grew up in the United States, Germany, Korea, and England. He is a member of the Mississippi Band of Choctaw Indians and is half Cherokee. This unique combination of global cultural influences converges in his multidisciplinary practice, which employs traditional Native media, such as beadwork, in sculpture, painting, film, and performance. Gibson’s pointed use of language challenges the viewer to wrestle with questions of identity and appropriation. His works are in public collections throughout the United States and in Canada. Recent solo exhibitions include the Savannah College of Art and Design Museum of Art, Georgia; the Institute of Contemporary Art, Boston; and the Cornell Fine Arts Museum, Winter Park, Florida. Gibson’s many awards include Art Matters and Joan Mitchell Foundation grants and a TED Foundation fellowship. He received his BFA from the Art Institute of Chicago and his MFA from the Royal College of Art, London. He lives and works in Hudson, New York. 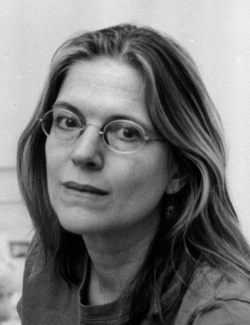 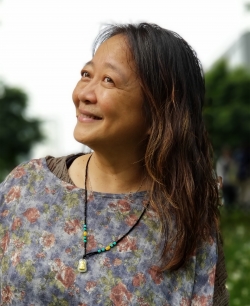 SIN-YING HO was born in Hong Kong in 1963, immigrated to Canada, and currently resides in New York City. Combining classical Chinese and contemporary ceramics techniques, Ho creates work that resonates with her multinational experience. She has exhibited her work worldwide; recently, Ho showed her series Eden at the Museum of Fine Arts, Boston. She was nominated for a 2011 Louis Comfort Tiffany Biennial Award in New York. Ho is an associate professor of ceramics at Queens College, City University of New York. She has lectured, taught, and run workshops across Canada, in Hong Kong and Jingdezhen—city of porcelain—in China, and at the Metropolitan Museum of Art and Harvard University. She holds a BFA from the Nova Scotia College of Art and Design and an MFA from Louisiana State University. 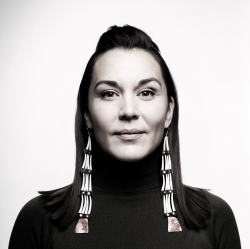 CARA ROMERO, born in California in 1977, is a photographic storyteller with a distinctive lens shaped by her Chemehuevi ancestry and years of formal study. Her staged images—merging fine art and autobiography through editorial and documentary styles—present nuanced social commentary from an indigenous worldview. Romero’s multilayered photographs challenge viewers’ preconceived notions about Native art, culture, and peoples. Romero studied photography at both the Institute of American Indian Arts in Santa Fe and Oklahoma State University. She received the Visions for the Future Award from the Native American Rights Fund in 2017. Her work in the Hood’s collection is joined by that of her husband, contemporary Pueblo potter Diego Romero. 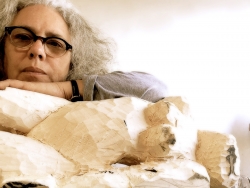 ALISON SAAR was born in 1956 in Los Angeles, California. Saar mines her own mixed heritage to examine forces that shape individual and cultural identity. Using humble, often reclaimed materials, her life-sized sculptures convey the power and vulnerability of the female form and evoke a breadth of aesthetic and social practices from the African diaspora. She has exhibited at major museums including the Hirshhorn Museum and Sculpture Garden, Washington, DC, and the Whitney Museum of American Art, New York. She has received the United States Artist Fellowship, the John Simon Guggenheim Memorial Foundation Fellowship, and two National Endowment Fellowships. She studied art and art history at Scripps College and received an MFA from the Otis Art Institute. She lives and works in Los Angeles. 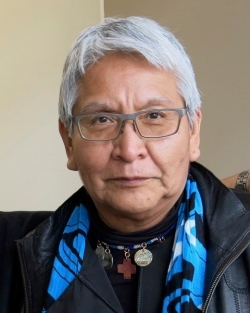 HULLEAH J. TSINHNAHJINNIE was born in Phoenix, Arizona, in 1954 into the Bear Clan of the Taskigi Nation and born for the Tsinhnahjinnie Clan of the Diné Nation. In works exhibited nationally and internationally, Tsinhnahjinnie creates images of Native thought, with an emphasis on producing art for indigenous communities. Responding to stereotypes of Native Americans fixed in a historical past propagated by early Western photography, she captures contemporary Native experience with the vitality of personal insight. She is a recipient of the Eiteljorg Fellowship for Native American Fine Art and a Chancellor’s Fellowship at the University of California, Irvine, and was a Rockefeller artist-in-residence. Tsinhnahjinnie is a professor in the Department of Native American Studies and director of the C. N. Gorman Museum at the University of California, Davis.