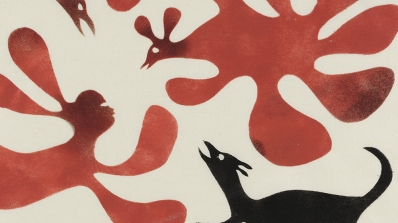 The estate of Evelyn Stefannson Nef recently made a bequest of two whalebone sculptures by the Inuit artist Karoo Ashevak to the Hood Museum of Art. Hailed as the most innovative and important Inuit sculptor of his generation, Ashevak was born in 1940 and lived in Taloyoak, Nunavut (formerly Spence Bay, Northwest Territories), the northernmost community on the Canadian mainland. Like so many other Canadian Inuit artists of his generation, he began to carve while attending a government-sponsored arts and crafts program in the late 1960s. It was during the period between 1970 and his premature death in a house fire in 1974 (at the age of thirty-four) that his work came into its own. He created approximately 250 sculptures that convey both technical expertise and a keen imagination, and they have had a profound influence upon subsequent generations of artists. Ashevak primarily worked in carved whalebone, often inlaid with baleen, stone, and bone. His highly creative and expressionistic approach to carving led to figures with distorted features that are both whimsical and disturbing. His subject matter likely arises from indigenous cosmology, with its emphasis on the spirit world and the concept of transformation.

Evelyn Nef (1913–2009) was married to well-known Arctic explorer Vilhjalmur Stefansson from 1941 until his death in 1962, during which time they lived primarily in Hanover, where they helped found the Arctic Studies Institute at Dartmouth College. Nef became a considerable authority on the Arctic in her own right and was at various times acting director of the Arctic Studies Center, head librarian of the Stefannson Library, and a teacher of Arctic studies seminars.