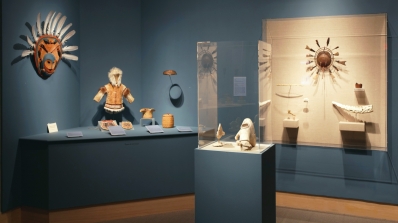 Native American painter Fritz Scholder was born in Breckenridge, Minnesota, in 1937.Trained by theYanktonai Sioux artist Oscar Howe from 1950 to 1954, Scholder later studied painting and art history at California State University, Sacramento, under the tutelage ofWayne Thiebaud, where he was influenced by the broad ideology of Pop Art. Beginning as an abstract colorist, Scholder shifted his focus during the 1960s to an expressionistic exploration of Native American themes and began his American Indian series in 1967 while teaching at the Institute of American Indian Arts in Santa Fe, New Mexico. Beginning in the early 1970s with President John Kemeny's rededication of Dartmouth's original mission to educate Native American students, four important Native artists were brought to campus as artists-in-residence, the first of whom was Fritz Scholder in 1973.

Painted while he was in residence at Dartmouth, Dartmouth Portrait #17 appears to make reference to the then-current debate over Dartmouth's intercollegiate athletic teams' unofficial use of an Indian mascot. After a long protest effort by Native American faculty and students, together with the support of many non-Native faculty, students, administrators, and alumni, college trustees issued an official statement in 1974 discouraging the mascot's use. This canvas's predominant hue of green (Dartmouth's school color) and monumental and dignified figure (who is in traditional dress and carries an eagle-feather fan as a symbol of spiritual harmony and prestige) offer a counterpoint to more stereotypical renderings of an Indian warrior. At the same time, the figure's almost tentative rendering and ambiguous expression may be read as an expression of uncertainty as Scholder and the Dartmouth community attempted to come to terms with what form the contemporary Dartmouth Indian would take.

Text by Emily Shubert Burke, excerpted from the 2009 exhibition catalogue Modern and Contemporary Art at Dartmouth: Highlights from the Hood Museum of Art, and by Karen S. Miller, Assistant Curator for Special Projects