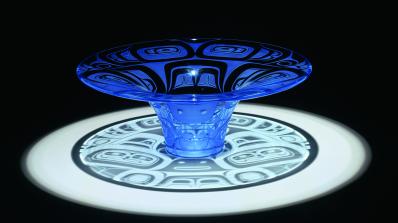 During the spring of 2009, the Hood Museum of Art acquired two stunning examples of Plains textile art to add to its Native American collection. The first of these is a Sioux painted pictorial buffalo robe, dated about 1870–80, depicting the war exploits of intertribal conflict (Sioux warriors fighting Crow warriors, who are recognizable by their hairstyles and attire). This painted hide, with figures outlined in pen or pencil and then colored in with paint or commercial dyes, would likely have been worn by an accomplished warrior, the scenes depicting his many brave deeds. It is a classic example of the height of Plains representational painting, which occurred between 1860 and 1900.

A means of preserving a public record of heroic deeds (known as "counting coup"), Plains representational painting includes episodic, non-chronological narrative content (meaning that a number of separate events are depicted rather than one large battle or expedition) and is characterized by twodimensional treatment of figures rendered in profile. Here, the horses' legs are splayed out to the right and left to suggest galloping. This piece is an especially important acquisition as it represents a direct stylistic and thematic link to the Hood's collection of ledger drawings, an essential aspect of the evolution of Plains pictographic representation.

The second acquisition is a Blackfeet beaded and fringed hide man's wearing shirt from about 1875–85. Made of mountain sheep hide, this formal shirt has rare triangular elements made of glass trade beads and decorative pendants on its bottom corners which are the hind legs of the animals used to make the shirt. It is trimmed with whole ermine (including skulls) and human hair, which was almost certainly obtained from the head of an enemy. Made by a woman, this garment would have been worn by a man highly regarded in his community; only Plains men who had achieved honor earned the right to wear such a highly decorated shirt. With its colorful beadwork, classic construction, and interesting appendages, this is a visually stunning example of the Plains man's formal shirt.