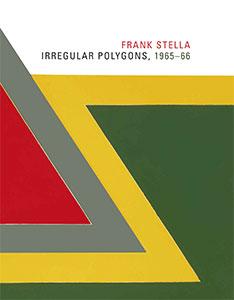 Although based on simple geometries, the Irregular Polygons (1965–66) constitute one of the most complex artistic statements of Frank Stella’s career. The eleven compositions combine different numbers of shapes to create daringly irregular outlines. Stella made four versions of each composition, varying the color combinations. They mark a radical shift from the artist’s earlier striped works in their use of large fields of color. The asymmetric canvases play with illusion, confronting Stella’s previous emphasis on flatness while anticipating his career-long exploration of space and volume in both painting and sculpture. This volume is valuable resource for scholars, curators, and aficionados of modern art, fans and practitioners of the art of painting, and anyone else who enjoys insight into the cultural turning points of the modern age.