A Point of View
July 05, 2003, through February 22, 2004
In the usual museum setting, African art displays aim to enhance our understanding of the diverse cultures to which they belong. A Point of View addresses the idea that, by the very nature of museum viewing and displaying, African arts often can tell us more about ourselves and our relationships to other cultures than about the cultures they are meant to represent.

How Geometry Shapes Composition and Perception 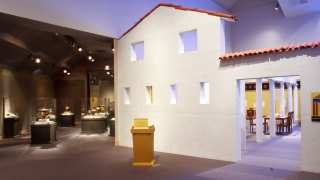 Images of Childhood from the Classical Past

It is not widely known that ancient Greek artists were the first to create images of children that showed them as they were instead of as miniature adults. They also observed and recorded children's characteristic gestures, their bonding with parents and caregivers, their various activities from learning to crawl to assisting in religious ceremonies, and their love of play. In the absence of extensive written testimony about children from this period, artifacts and images are a vital link to the lives of girls and boys from birth to adolescence.

Coming of Age in Ancient Greece: Images of Childhood from the Classical Past is the first major exhibition to explore these images of childhood from ancient Greece. Over 120 art objects on loan from American, Canadian, and European collections chronicle the emotional and familial environment in which children were raised, their participation in religious rituals, the commemorative objects that marked their early death, and their transition to adulthood. The exhibition also presents images and stories of children in mythology. Painted vases, sculptures, grave monuments, and artifacts such as toys and baby feeders bring ancient Greek children's experiences to life.

Ceramics and the Question of Form vs. Function

Connecting with Audiences Through the Centuries