Abstraction comes from many different sources. It may begin with a concrete object, or something less tangible, such as an emotion or thought. Artists use abstraction to express that which cannot be conveyed through representation and to explore other sources of art-making. The works in the exhibition date from immediately after World War II until the present. Some were strongly influenced by abstract expressionism, and others stem from later movements, such as minimalism and conceptualism. This exhibition highlights three important sources of abstraction: gesture, emotion, and shape.

This exhibition was curated by Philip Dytko, Class of 2017, Pauline Lewis, Class of 2016, and Molly Siegel, Class of 2016, each of whom was enrolled in Professor Mary Coffey’s ARTH 71: The American Century. This course provides a thematic overview of American art in the twentieth century. Students in the class were placed into curatorial teams of three, and each team identified a theme, selected six objects from the permanent collection, drafted labels, and proposed an installation design for the exhibition. The teams presented their proposals to the entire class at the end of the term, and students voted on their favorite. Gesture, Emotion, Shape: Sources of Abstraction was the winning exhibition. 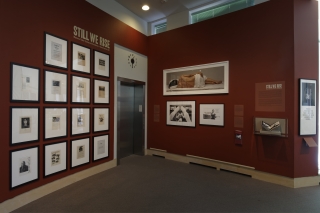 Still We Rise
May 30, 2015, through July 12, 2015
Still We Rise features contemporary art from six women of color whose work embodies the theme of existence/resistance. Working against the backdrop of sexism and racism in the United States today, in its particular "post-racial" moment, these artists remind us that women of color live in the dangerous intersection of race-and gender-based forms of oppression.

Picturing the World
June 06, 2015, through June 26, 2015
The Class of 1965 produced Dick Durrance, Dewitt Jones, Christopher Knight, Heinz Kluetmeier, and Joel Sternfeld, a remarkable group of photographers. With subjects from the Olympics to the Vietnam War, the photographs in this exhibition depict a variety of subjects from around the world, capturing the unique viewpoint of each photographer. This exhibition honors the fiftieth reunion of the Class of 1965.

Seventeenth-Century Art in the Netherlands

The Golden Age
March 31, 2015, through May 31, 2015
This exhibition showcases seventeenth century Dutch and Flemish paintings and prints from the Hood Museum of Art’s collection. It includes a dramatic seascape, a still life, Biblical subjects, scenes of everyday life, and several portraits by artists including Rembrandt, Frans Hals, Hendrik Goltizus, and Anthony van Dyck. The exhibition was organized in conjunction with Art History Professor Joy Kenseth’s course on Northern Baroque art, which examines painting in Flanders and Holland from 1600 to 1700. These works touch on many of the course’s themes and the students will examine and write papers on selected works throughout the term.

Exploring the Excesses of Human Emotion

The Tortured Soul
April 11, 2015, through May 24, 2015
When encountering the tortured soul, one is forced to confront aspects of the human experience that are often easier to ignore. The tragedies of human folly frequently appear in literature and have captured the attention of a variety of people, including artists. Often the aberrant behavior of a troubled individual comes as the result of excess, whether it is lust for power, greed, love, or some emotion that is felt so intensely that the pull is irresistible, regardless of consequences. As artists depict these struggles, the relationship between the rational and irrational comes into play. Questions arise about the role of imagination and creativity in the face of fact and logic. Both imagination and reason have much to offer; yet both can be dangerous. The works of art featured in The Tortured Soul represent the darker aspects of humanity described in literature in order to reveal continuities with contemporary life. 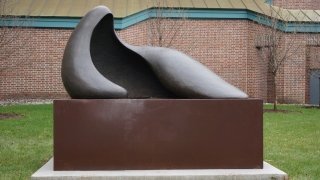 Allan Houser (1914–1994) was a noted American sculptor, painter, and draftsman and one of the major figures in Native American art of the twentieth century. He often drew on his Chiricahua Apache heritage when making sculptures that depict the Native American people of the Southwest. A versatile artist, he also created modernist abstract sculptures and worked in a variety of media including bronze, stone, and steel. Dartmouth College and the Hood Museum of Art celebrate the centennial of his birth with an installation of five major sculptural works in the Maffei Arts Plaza and Hood gateway, as well as a fall 2014 exhibition of drawings in the Strauss Gallery, Hopkins Center.