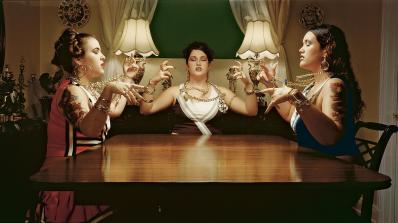 This fall term, Dartmouth College Humanities Institute participants, including visiting residential fellows and several Dartmouth faculty members, are meeting weekly on campus to investigate the impact of visual humor on history, psychology, culture, and everyday life from multiple perspectives. No Laughing Matter is led by David Bindman (Morton Distinguished Fellow) and Angela Rosenthal (Dartmouth Institute Director), under the auspices of the Leslie Center for the Humanities, Dartmouth College, with the participation of the Yale Center for British Art and the Du Bois Institute of African and African-American Studies at Harvard. The Humanities Institute will host an international conference, November 8-11, 2007. The Hood exhibition has also been organized in conjunction with the Northeast American Society for Eighteenth-Century Studies Annual Meeting and conference, October 25-28, 2007, which will host a special panel titled Visual Humor in the Global Eighteenth Century in conjunction with the Humanities Institute.

The Institute explores the uses and abuses of humor in representations of different peoples of the world in all media and during all periods. The exhibition, drawn primarily from the museum's collections, focuses on prints and photographs from the eighteenth century to the present day. It does not address one "race" or nationality but demonstrates that humorous stereotyping has been employed to represent different groups that only in the nineteenth century were separated out into races. If the media used vary, then so do the methods of ridicule. All, however, involve a reduction of the subject to a limited number of easily grasped generalities. The effect of such reductive images is both powerful and pernicious. The contemporary artists in the exhibition have sought in various ways to demonstrate and counteract the continuing influence of such imagery, by exposure, irony, and appropriation, in some cases turning the tables by inverting the stereotypes. It goes without saying that many of the images are now seen as deeply offensive, but it is nonetheless important to look historically and critically at what would have been a daily reality in the not too distant past.

This exhibition was organized by the Hood Museum of Art, Dartmouth College, and generously supported by the Harrington Gallery Fund.