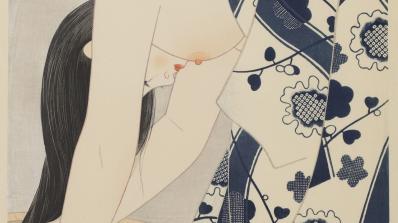 Dartmouth Looks at The Tale of Genji (Genji monogatari)

Often called “the world’s first novel,” The Tale of Genji was written in the early eleventh century by Murasaki Shikibu, the nom de plume of a woman born into the middle ranks of the aristocracy. Its complex development of character and sophisticated representation of moral and aesthetic values have made The Tale of Genji the central canonical text of one of the world’s most important literary traditions.

This exhibition of works from the Japanese collection of the Hood Museum of Art showcases representations of the eleventh-century Tale of Genji and three sequels written in the mid-nineteenth century. A handscroll and folding screen painted during the early to mid-1700s offer a sense of high-culture approaches to the novel. A selection of woodblock prints demonstrates how the novel and its sequels were reworked for popular audiences.

This exhibition is curated by Dartmouth faculty members Dennis Washburn, Professor of Asian and Middle Eastern Languages and Literatures and Comparative Literature, and Allen Hockley, Associate Professor of Art History. It is presented in conjunction with the colloquium “What Is a Classic? Translation, Reception, and the Making of Canons,” an open forum bringing together scholars of Japanese literature, art history, classics, and Chinese literature to discuss the challenges for liberal arts institutions of teaching or translating so-called classical works. Dennis Washburn published a translation of The Tale of Genji in 2015.

This exhibition was organized by the Hood Museum of Art and generously supported by the Harrington Gallery Fund.