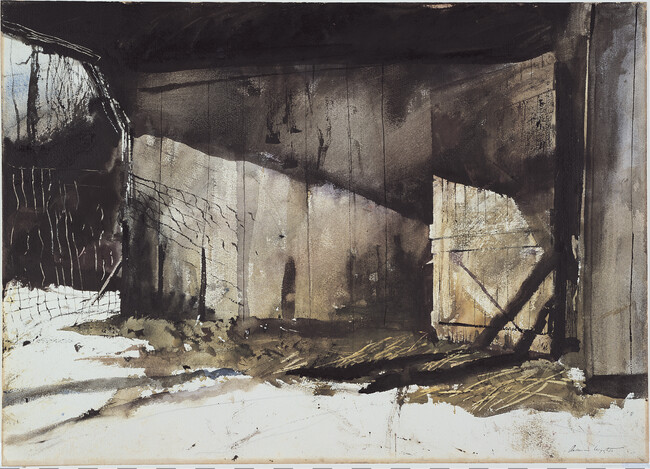 Transparent and opaque watercolor over graphite on heavy wove paper

Hood Museum of Art, Dartmouth: Presented to Robert Frost in 1954, on the occasion of his eightieth birthday, and given to the College in 1982 by Mr. and Mrs. Edward Connery Lathem

Signed, in pen and black ink, lower right: Andrew Wyeth; inscribed in graphite, on reverse, lower right: S2621; inscribed by Robert Frost, in ink, on original backing [now in object file]: This to Kay from 1954 on' / RF-Aetat LXXX; inscribed by Kathleen Morrison, in ballpoint pen, below Frost's inscription: And from Kay to Anne Morrison Gentry- / to be Smyth- / July 1, 1968.

The artist; to Knoedler Gallery (as agent), New York, 1953; sold to Edward Hyde Cox, Frederick Baldwin Adams, Waller Barrett, Ray Nash, Charles Woolsey Cole (president of Amherst College), and others, January 1954; presented to Robert Frost in honor of his eightieth birthday, March 1954; given to Kathleen Johnston Morrison (his secretary-manager), 1954 (physically retained by Frost until his death in 1963); given to Anne Morrison Gentry Smyth (her daughter, on the occasion of her wedding), July 1968 (physically retained by Kathleen Morrison until 1987); sold to the Trustees of Dartmouth College (made possible by a donation from Mr. and Mrs. Edward Connery Lathem), Hanover, New Hampshire, 1982; transferred to present collection, May 1987.