Apkallu with Pail and Date-Palm Spathe: Assyrian Relief from the Northwest Palace of Ashurnasirpal II at Nimrud, Room G 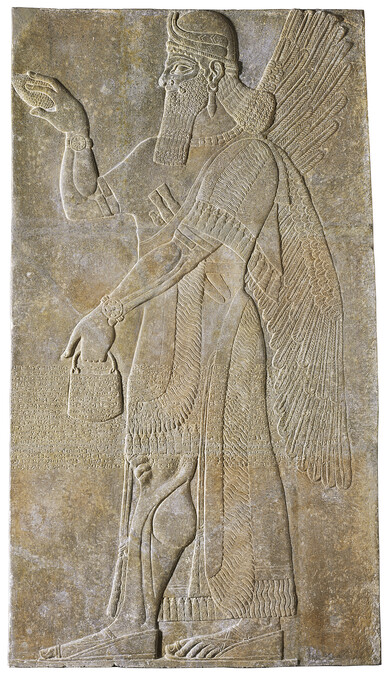 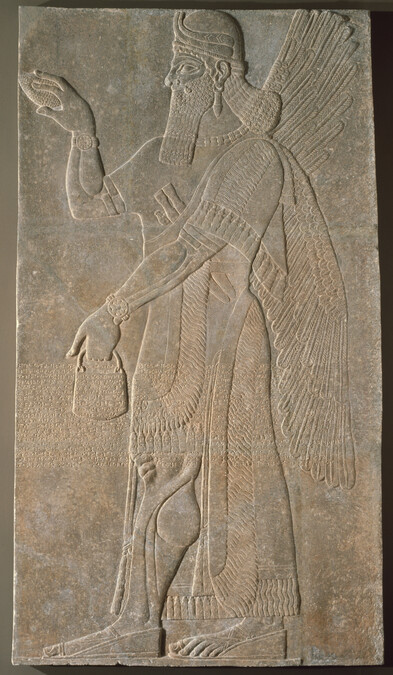 ARTH 20, Art of Ancient Egypt and the Near East, Steven Kangas, Spring 2013

ARTH 1, Steve Kangas, Ada Cohen, Bodies and Buildings: Introduction to the History of Art in the Ancient World and the Middle Ages, Fall 2013

ARTH 20, The Art of Ancient Egypt and the Ancient Near East, Steven Kangas, Winter 2014

ANTH 12.2, Archaeology of the Ancient Near East, Daniel Potts, Spring 2014

ARTH 20, The Art of Ancient Egypt and the Ancient Near East, Steven Kangas, Spring 2015

ARTH 1, Bodies and Buildings: Introduction to the History of Art in the Ancient World and the Middle Ages, Jane Carroll, Steven Kangas, Fall 2015

ANTH 12.2, The Archaeology of the Ancient Near East, Jason Herrmann, Spring 2013

The reliefs were excavated by Sir Austen Henry Layard (1817-1895), at Nimrud, Iraq, about 1845-47; offered to Missionaries by Henry Creswicke Rawlinson (1810-1895), a political agent of the British in Baghdad, about 1853; Professor Oliver Payson Hubbard, Class of 1873h (1809-1900), Chemistry Professor and College Librarian asked Reverend Austin Hazen Wright (1811-1865), Class of 1830 (Medical missionary stationed in Oroomiah, Persia) to acquire some reliefs for Dartmouth College, 1853; the Dartmouth reliefs were selected and packed by Reverend Henry Lobdell, M.D. (1827-1855) at Nimrud, about 1854-55; travelled from Nimrud to Mosul on mules; travelled on camels across the Syrian desert to the Mediterranean at Alexandretta (Iskenderun); transported to a sailing vessel to Beirut; travelled on the steamer "Daniel Webster" to Boston; travelled by rail to Hanover, New Hampshire; arrived on December 11, 1856.