Jasim was in a Cage, from the Amman series of The Abu Ghraib Project 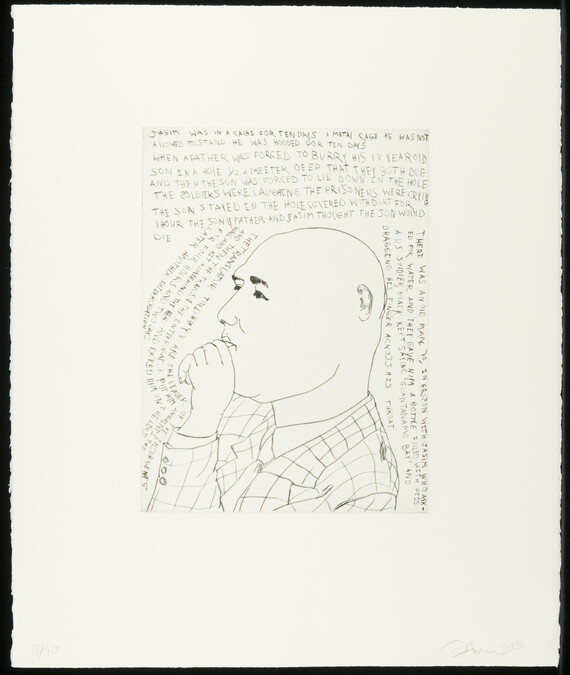 Hood Museum of Art, Dartmouth: Purchased through the Anonymous Fund #144

Signed and dated, in graphite, lower right margin: D[illegible] 2006; numbered, in graphite, lower left margin: 19/30; titled and inscribed, in plate, upper left to right: JASIM WAS IN A CAGE FOR TEN DAYS A METAL CAGE HE WAS NOT / AllOWED TO STAND HE WAS HOODED FOR TEN DAYS / WHEN A FATHER WAS FORCED TO BURRY [sic] HIS 18 YEAR OlD / SON IN A HOLE 1/2 A MEETER [sic] DEEP THAT THEY BOTH DUG / AND THEN THE SON WAS FORCED TO LIE DOWN IN THE HOLE/ THE [backwards S]OLDIERS WERE LAUGHING THE PRISONERS WERE CRYING / THE SON STAYED IN THE HOLE COVERED WITH DIRT FOR / 1 HOUR THE SON & FATHER AND JASIM THOUGHT THE SON WOULD / DIE; inscribed, in plate, center to lower right: THERE WAS AN OlD MAN 70 IN PRISON WITH JASIM WHO ASK- / ED FOR WATER, AND THEY GAVE HIM A BOTTLE FILLED WITH PISS / A US SOLDIER, BlACK, KEPT SAYING GUANTANAMO BAY AND / DRAGGING HIS FINGER ACROSS HIS THROAT [inscription oriented horizontally, with left at center of page]; inscribed, in plate, center to lower left: THE TRANSLATOR TOLD HIM "YOU ARE THE LEADER OF THE INSURGENTS" / AND THEN THE TRANS. & THE INTERROGATOR PUT HIM AGAINST THE / WALL AND HIT HIM BEHIND THE HEAD AND KICKED HIM ON THE LEGS / FOR FOUR HOURS AND TWO DAYS / LATER ANOTHER I[backwards N]TERROGATION [inscription oriented mostly horizontally, with left at center of page, conforming to profile of figure] Embossed, lower right corner: [insignia: C [symbol] [three horizontal lines stacked vertically], with arc above and below] Watermark, lower right: BFK RIVES

The artist, Philadelphia, Pennsylvania; sold to the present collection, 2007.