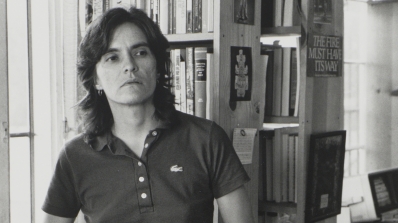 In Yolanda (slide 1), a woman with a brown, shoulder-length shag cut and strong jawline stands, hip-cocked and her hands in the pockets of her jeans, before two full, back-to-back bookcases. Her gaze is not directed at the viewer, but her expression is firm and set. Printed below the images is a statement that begins, "(m)y Latina side informs my lesbian side with chispa & pasión." The photograph Julia (slide 2) portrays a second woman with shorter brown hair and dangling earrings who poses before a "stop AIDS Los Angeles" poster. She looks out at the viewer with a look that suggests concern. This may reflect the seriousness of the work in service of diversity that she discusses in her statement. These are two of seventeen portraits, the photographer Laura Aguilar (1959–2018) created of women in her community for her series Latina Lesbians (1986–90). The Hood Museum of Art is proud to have brought nine of these works into our permanent collection, the second-largest museum holding of original prints from this series. Relaxed and intimate, the photographs are all black and white portraits of women in their homes or outdoors, locations they felt connected to.

For this group of photographs, Aguilar collaborated with her subjects to create portraits that reflected their inner lives. The finished prints include short, handwritten statements from the women about one aspect of how they see themselves. The women in these portraits share their thoughts on being women, on the work they do, on aging, and on motherhood as well as being lesbians and Latinas. Together, the series creates a varied and positive picture of Latina lesbian life in the late 1980s.

The combination of image and text became popular with photographers in the mid-1980s. But it was a complex choice for Aguilar, who lived with auditory dyslexia, which made verbal and written language very difficult for her to understand or use to express herself. By choosing to include text with the visual work—which she had found easier for communication—Aguilar challenged herself to find ways to navigate her disability.

Aguilar was herself a proud lesbian, though she was conflicted about claiming that label. She was quoted as saying: "I'm not comfortable with the word Lesbian, but as each day go's [sic] by I'm more and more comfortable with the word LAURA." Whatever her relationship to that label, throughout her career she produced numerous series about different aspects of women's communities in California and throughout the southwest that displayed her love of and respect for women. This series incorporates many of the themes that Aguilar consistently mined throughout her career: the lives of lesbians celebrated but not sensationalized; positive representation of Mexican Americans and of people of different ages and body types; text combined with image; and stories from a first-person perspective.