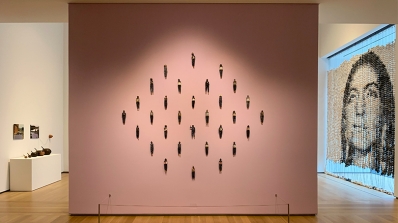 #RockYourMocs with the Hood Museum of Art's Collection

The Hood joins in the Rock Your Mocs movement by featuring five pairs of moccasins in its collection.

Over a century ago, the first American Indian Day was declared by the governor of New York. However, it was not until 1990 that the contributions of Indigenous people to the United States gained national recognition in the form of Native American Heritage Month. Thirty years later, there are 6.9 million Native Americans and Alaskan Natives living in the lands now called the United States, and millions more Indigenous peoples living throughout the Americas. Each of these Indigenous communities has a unique history and ongoing traditions, languages, and art forms.

While the celebrations of this month have taken many forms in its short history, perhaps none is more flourishing than the "Rock Your Mocs" movement. Started in 2011, #RockYourMocs has become an internationally recognized means for Native people to show off their cultures. Its founder, Jessica "Jaylyn" Atsye of Laguna Pueblo, has described the movement as a cultural empowerment initiative intended to showcase intertribal solidarity and Indigenous individuality. Across social media platforms during the week of November 15-21, there will be an array of moccasin selfies posted with the #RockYourMocs hashtag.

The Hood joins in the Rock Your Mocs movement by featuring five pairs of moccasins in its collection. While each pair is visually stunning in its own right, together these moccasins highlight the diversity of the Indigenous cultures, makers, and artists we celebrate all year long.

For many, a set of Jicarilla Apache moccasins will bring to mind the images of a powwow, where the sounds of jingle dresses ring out across the arena. Adorned with metal cones and fringe, distinctive features of the Jicarilla Apache style, this pair has a kinesthetic quality. Created in about 1900, this pair is an example of the illustrious stories moccasins can tell. The size, for one, tells us the wearer was a man. The materials show us what resources were available to the Jicarilla Apache at the time. The metal cones, specifically, indicate that the wearer used them for dancing. The beadwork, a time-consuming art form, tells us the moccasins were made for the wearer by someone who wanted to honor him. Then and now, moccasins reflect the identities, kinships, and cultures of their makers and wearers.

One of the oldest pairs in the Hood Museum's collection is the Seneca moccasins, made in about 1820. The moccasins combine stunning geometric patterns with floral designs mastered by Haudenosaunee artists. These moccasins are unique due to the artist's use of quills in their creation. Soon after the pair was made, glass beads--a material brought by European traders--became the more popular medium to work in for artists in the Northeast. Haudenosaunee women have since built on the aesthetics of these original moccasins. From the raised beadwork technique perfected for the 19th- and 20th-century tourist market to the elaborate floral motifs in today's Indigenous fashion, the legacy of these Seneca moccasins lives on.

Made of moose hide and wolf fur, a pair of Dene mukluks in the collection offers a powerful example of footwear created for both fashion and function. The Dene (Athabascan) artist who produced these winterized moccasins may have worn a similar pair during the coldest months endured by First Nations of the subarctic region. Made from a blend of materials collected from Dene land and the vibrant dyes acquired from Western settlers, these moccasins are an extraordinary example of the indigenous creativity developed through trade. Created in 1940, the mukluks speak to the Indigenous practice of adaptation to both withstand environmental forces and construct modern Indigenous aesthetics and identities.

Created at the turn of the century, these well-traveled Tlingit moccasins were made by an artist from what is now called Southeastern Alaskan and later acquired from a Menominee chief in the Great Lakes region. Although the prominent floral decor and pointed toe of these moccasins are often associated with Woodlands artists, this pair also features the motif of a water beetle, one of several important animal figures in Tlingit artistry. Created for the wedding between a Menominee chief and a Tlingit woman, these moccasins illustrate the importance of intertribal relationships. Through trade, kinship ties, and civic engagement, Indigenous art is often the product of these intertribal relationships. While each Indigenous culture is unique, it is the sharing across those cultures that has resulted in a contemporary Native identity today.

A small but notable pair of Lakota moccasins lives in the collection as well. Created for a child, the moccasins are adorned with thousands of beads and are unique for their three-dimensional, all-over beading style. Made in about 1900, these moccasins is similar to other Plains region footwear in that they are heavily adorned with vibrantly colored beads. Yet, this pair in particular is decorated even more extensively, including on the soles. The Lakota artist who made this pair would have created them for a child attending a special event. More fashion than function, this pair is an impressive demonstration of the skilled craftsmanship honed by Lakota artists and the pride they take in creating. Today, you can find similar labors of love across the #RockYourMocs hashtag, which is bound to feature countless moccasins handmade by family members for special occasions.

While we do not know the names of the Indigenous people who made the moccasins in our collection, their identities would have been well known and honored by their communities. Moreover, these makers contributed art forms, cultural pride, and fashion cherished by the generations that followed them. Today, the lessons taught by these moccasins in the Hood's collections live on. We invite you to explore the #RockYourMocs social media posts and learn how Indigenous people honor, adapt, build upon, and blend the styles featured in the Hood's collection.

Taylor Rose Payer joined the Hood in September 2020 as the Cultural Heritage and Indigenous Knowledges Fellow. Taylor assists with developing relationships between the Hood Museum of Art, Dartmouth College Library, and Native American and Indigenous communities built around collaborative and collections-based research.

Taylor earned her M.A. in Public Humanities from Brown University and B.A. in Women's and Gender Studies from Dartmouth College. Prior to the Hood, she has worked at the Rhode Island School of Design Museum of Art, the Walker Art Center, the Portland Art Museum, and the All My Relations Arts Gallery. Taylor is a member of the Turtle Mountain Band of Chippewa.