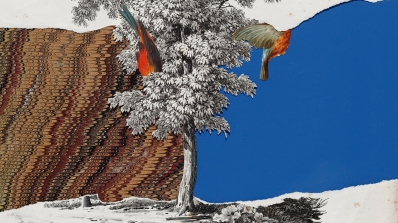 Explore the Art of Varujan Boghosian

in the Hood Museum's Collection

In 1968, Varujan Boghosian was invited to Dartmouth as an artist-in-residence and stayed to become a professor of art in the Studio Art Department. In 1982, he was named the George Frederick Jewett Professor; he retired from that post nearly thirty years later.

Born in New Britain, Connecticut, of Armenian heritage, Boghosian served in the navy at the end of World War II and, like many of his generation, after his service attended college on the GI bill. He enrolled first at Connecticut Teacher's College (1946–48) and then the Vesper School of Art in Boston (1948–50). He began to show his watercolors and woodcuts at local galleries whiles at Vespers and had his first solo exhibition in 1950. Upon his return from a trip to study and work in Italy on a Fulbright grant, friends suggested that he meet and share his work with the ex-Bauhaus professor and master of color theory Josef Albers, who was then teaching at Yale University. Albers was impressed with the younger artist's work and admitted Boghosian to the program, where he received first his B.A. and then his M.F.A. in 1958. After Yale, he taught at the University of Florida and Cooper Union, Pratt Institute, Yale, Brown, and then Dartmouth. He was an influential teacher during his years at the College and made a habit of befriending the artists-in-residence, often trading work with them.

In a short 2018 piece titled "The Power of Wonder: The Art of Varujan Boghosian," Virginia Rice Kelsey 1961s Director John R. Stomberg celebrated the experience of seeing a work by Boghosian:

There are three primary stages of engagement with the art of Varujan Boghosian. It starts with delight. We are immediately drawn into the visual impact of the colors and shapes, the subjects, and the overall strength of his compositions. This soon gives way to marvel as we begin to think through the potential relationships of his selected images and objects. We find connections, historical and literary, sometimes with the aid of his titles. As the whole coalesces, that is, as the forms and content merge, the universe of the work expands. The magic of Boghosian's gift takes hold. We're launched—set off into the realm of wonder. And this is the truly amazing part. By spending time with his work, we get to a place where we increasingly discover his spark and mystery in our own surroundings. His work leads us to a place of enthusiasm and awe for the world. From the mundane to the magnificent, we see it anew. That is the power of wonder.