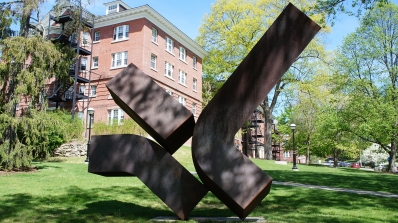 Explore other works of outdoor sculpture in the Hood Museum's collection

On August 19, 2020, a new work of public art — a large-scale cedar sculpture by artist Ursula von Rydingsvard — was installed on Dartmouth's campus.

Ursula von Rydingsvard's (b. 1942, Deensen, Germany) renowned wooden sculptures are at once constructed and organic, monumental and humble, formal and expressive. Her personal history draws von Rydingsvard to modest materials in her artistic practice—her family's long lineage of farmers; her woodcutter father, who was subjected to forced labor under Nazi rule; her early years in postwar refugee camps throughout Germany. Though inspired by it, the artist does not explicitly reference her biography. Instead, her transformation and recomposition of cedar, with its inherent softness and sensuous quality, evoke abstract and palpable emotionality.

The artist explains, "Babelki are the popcorn stitches that get knit onto sweaters, but in Polish, they also refer to the little lambswool fluff balls attached to the neck or waist of a sweater."1 Here, these forms emerge from the sides of Wide Babelki Bowl. Traces of the human hand are visible in the work's meticulous assemblage. The wooden bowl may recall an unassuming household object, but it can also be seen as a metaphoric vessel. It resembles a geologic formation that points to its surrounding environs, perhaps asking what histories and narratives these lands contain.

Furthermore, it is made to human scale and for bodily interaction. As von Rydingsvard elucidates, "The whole basis of scale is in relationship to the human size. Even when it's outdoors, it's in relation to the human size, but also in relationship to what surrounds it. In scale it's incredibly important outdoors to have a presence underneath the sky, underneath the sun, and I never, ever think of competing with what nature does in any way. But I do hold my own with the surroundings, to have a presence in the context of the surroundings."2 Von Rydingsvard's Wide Babelki Bowl is now situated on Dartmouth's campus, allowing our community to actively engage with this work as it becomes an integral part of the social and cultural fabric.