Look and Listen | Music and Materials

Experience the Hood Museum's collection in new ways while wandering the galleries and listening to music. Jules Wheaton '19 and Hadley Detrick '22 paired three works of art that have strong material components with songs. 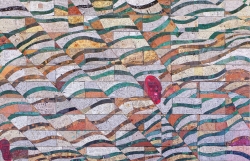 Elias Sime works with discarded motherboards and electronic parts in his Tightrope series to form new creations that are both representational and abstract. This piece uses technology that was once at the height of innovation but has since been rendered useless by rapid modernization. Though the connection to Kraftwerk's "Computer Love" and album Computer World may initially appear quite literal, the 1981 album was also an exploration of the themes of people's newly technological lives, as well as experimentation with electronic music itself. 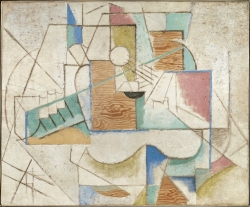 Django Reinhardt's bohemian upbringing falls in line with the increasingly anti-establishment Cubist artworks that Pablo Picasso began painting in the early 20th century. These two outsiders (Reinhardt was a gypsy living in German-occupied territory and Picasso was a Spaniard in France) never let their difference inhibit their creativity. Picasso uses sand in this piece to add texture to the canvas, which echoes Reinhardt's upbeat and unpredictable jazz guitar in "Body and Soul."

Image: Pablo Picasso, Guitar on a Table, 1912, oil, sand, and charcoal on canvas. 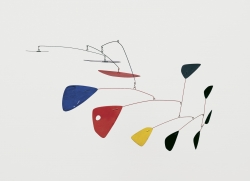 Alt-J's "Tessellate" has a heavy beat that competes with the visual weight of the dominant metal pieces in Calder's sculpture. Try imagining Calder's sculpture isolated from the other pieces in the gallery as you listen, to create a different atmosphere for this material-focused pairing.

"Look and Listen" is a student playlist project. Think of how your own favorite songs could fit with a work of art and share with us on any social media platform by tagging @HoodMuseum or using the hashtag #HoodMuseum.