Experience the Hood Museum's collection in new ways while wandering the galleries and listening to music. Devon Mifflin '21 selected three works that give the impression of movement and paired them with songs. 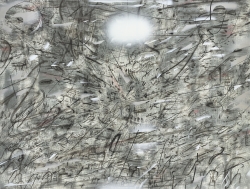 Immerse yourself in Julie Mehretu's work with the gentle echo of "Tides" by James McAlister, Sufjan Stevens, Nico Muhly, and Bryce Dessner. Mehretu uses architectural drawings and photographs as well as abstract and gestural markings to create her composition. Although they are rooted in concrete architectural forms, her bold markings and areas of still whiteness seem to be suspended in mid-motion. Listen to the sequence of reverberations in "Tides" and travel into Mehretu's complex and otherworldly painting. 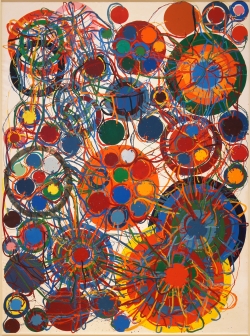 Let the energetic beat of Passion Pit's "Moonbeam" move your eyes around Atsuko Tanaka's vibrant painting. Using lines and circles as her primary forms, Tanaka created a composition that resembles an interconnected web of electric cables and bulbs. Notice how the bright, dynamic sounds of "Moonbeam" mimic Tanaka's enthusiastic application of saturated color. 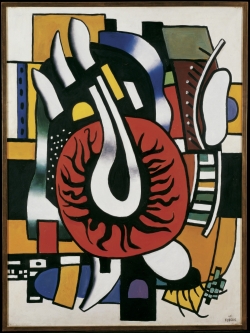 As the sounds in Olafur Arnalds's "Near Light" layer on top of one another, allow your eyes to explore the complexities of Fernand Léger's composition. Arnalds's song begins slowly and quietly but gradually picks up its pace, eventually adopting mechanical elements that complement Léger's work. Like "Near Light," Léger's Cubist painting is the fusion of its fragmented parts.

"Look and Listen" is a student playlist project. Think of how your own favorite songs could fit with a work of art and share a playlist with us on any social media platform by tagging @HoodMuseum or using the hashtag #HoodMuseum.