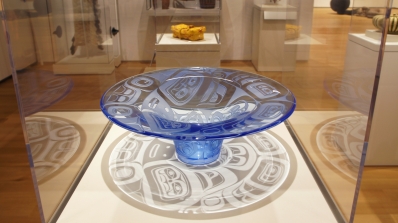 An Artist Talk with Preston Singletary

Preston Singletary uses traditional Tlingit art forms and iconography as the foundation for his glasswork, as exemplified by this luminous blue sculpture in the form of a crest hat. Singletary sees glass as a medium that can change our perceptions of the concrete form by creating "a sort of kinetic sculpture that is only revealed when the lighting is right." In this etched sculpture, he intentionally turns the hat upside down to resemble a bowl that casts brilliant shadows of the abstract crest designs when properly lit.

Glass was first introduced to the Northwest Coast area by Euro-American fur traders in the form of trade beads, and Singletary recognizes its colonial legacy: "Our art has always been a declaration of who we are. Using a modernart approach—with a new medium—gives us a new way of looking at Native American art. It moves us into the future while allowing us to reclaim what has always been ours."