This resource will allow you to lead your students through careful observation and analysis of this work.

Ask students to look carefully at the basket and describe everything they see.

* What do you notice about this basket?

Then become more and more specific as you guide your students’ eyes around the work with questions like these:

What do you notice about:

* the materials used to make this basket?

* the color of the basket?

* the shape of the basket?

* the way in which the basket is woven? 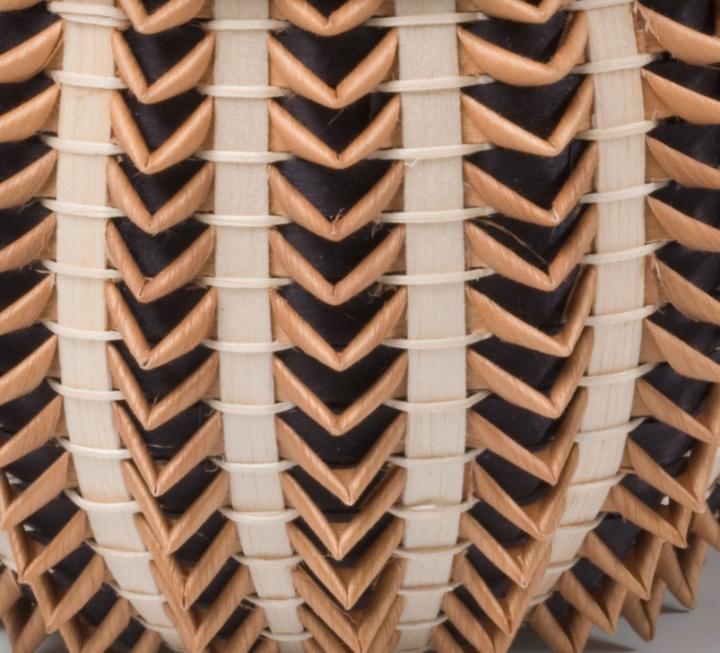 Once you have listed everything that your students noticed about the basket, begin asking simple analytic questions about this visual information to deepen their understanding of the work.

* How do you think this basket was made? Where did the artist start? What did she do next?

* What materials do you think she used?

* How do you think the artist created the different types of weaving?

* Does this basket look difficult or simple to make?

After each response, always ask, “How do you know?” or “How can you tell?” so that students will look to the work for visual evidence to support their theories.

At the end of this document, you will find background information about the basket that you cannot acquire simply by looking at it. Read the information or paraphrase it for your students.

Some basic interpretation questions for these objects might be:

* Why is basket making important to the Wabanaki?

* How does Ganessa Bryant honor the past with her work while also being true to the present? What is traditional about her basket and what is modern?

* Do you think this basket is well made?

* What makes it different from an inexpensive, machine-made baskets?

* What makes it a work of art?

Another realm that this fifth stage can encompass is one’s response to a work of art. Different from assessment, the realm of response can be much more personal and subjective.

* Do you like this basket? Why or why not?

* Does knowing the importance of basket weaving to the history, survival, and independence of the Wabanaki affect how you see or feel about this work?

Baskets are an inseparable part of the culture and traditions of the Wabanaki tribes* who believe that basket making is a skill that has been passed from weaver to weaver, generation to generation, uninterrupted for thousands of years. Wabanaki baskets are made from splints of the brown ash tree. Known as the "basket tree," the brown ash is considered sacred to many of the Native peoples of the northeastern United States and Canada.

For Wabanaki basket artists, weaving is a spiritual process. Many artists collect their own materials from the natural world, cutting down the ash tree and then preparing the wood for weaving. There are several steps involved in the preparation. The tree is first cut into sections and the bark is removed. The basket maker then pounds the end of the logs to split the wood along the tree rings. Each ring is then sliced into long, thin strips or splints of various thicknesses. Once the splints are soaked and sanded they can be woven into a basket. Artists also collect sweetgrass, a local grass with a sweet aroma. It is most often used in a braided form. Some weavers can braid so quickly that the movement of their fingers is barely visible. As they braid, the grass makes a sound known as "singing." The artistry in these baskets is in the weaving, and many types of weaves are passed from generation to generation, specific to individual families. The shapes of the baskets vary with fashion and the market, but the weaves are often inspired by tradition and the past.

This point basket was made by Ganessa Bryant (Penobscot) in 2008. Bryant drew from the past in her choice of materials and weave, a traditional porcupine weave, made by folding and pinching the ash splints so that they create spiky points. She added her own innovation with color, inserting a strip of black beneath each cinnamon colored point to create contrast, and by varying the width of her weavers to create visual interest. As a result, she created a basket that is modern in design and sculptural in form.

Specialized splint baskets used to gather and prepare food and trap fish were made and used before and after European contact. During the eighteenth and nineteenth centuries, church, state, and federal policies pressured Native people to reject their own cultures.

Instead, many tribal people used basket making as a way to make a living outside of non-Native towns and cities. Wabanaki families traveled together by canoe, foot, horse, train, and steamship to sell their baskets in Boston, New York, and Philadelphia. By the 1870s resort hotels sprang up along the New England coastline and inland lakes. These were places where Wabanaki traditionally had villages, and tribal people continued to return to them to hunt and fish. So it was only natural that Wabanaki set up encampments to sell baskets, as well as other art forms, beside the new resorts. These encampments built community among Wabanaki peoples who might otherwise have remained dispersed.

During this era, Maine Indian baskets became extremely popular. Basket making became the primary source of income for many Wabanaki families. By the turn of the twentieth century almost every Penobscot and Passamaquoddy household was involved in basket making. Entire families worked all winter in preparation for the summer sales. While utility baskets continued to be made for both Native and non-Native use, "fancy baskets," decorative baskets with whimsical shapes, intricate weaving patterns, or multiple colors, became very popular and were made to fit every imaginable need.

The 1930s through the 1980s were hard times for Wabanaki basket makers. Cheap, largely machine-made baskets began to flood the market. Wabanaki children were encouraged to focus on education, college, and finding steady jobs. Although it was considerably harder to make a living from baskets, some basket makers kept weaving, in the hope of keeping the tradition safe for future generations.

The 1990s brought a resurgence of basket making in Wabanaki communities. In Maine, Indian baskets gained acceptance as a legitimate art form among art collectors, gallery owners, museums, and state and federal arts agencies. This resurgence was due to the hard work of the weavers who kept this tradition alive and their decision to unite—the weavers formed the Maine Indian Basketmakers Alliance (MIBA) in 1993. Offering community workshops and apprenticeship programs, and sales opportunities for its members, MIBA has emerged as an international success story in traditional arts preservation.

*In the eighteenth century, five Eastern Woodlands tribes—the Abenaki, Penobscot, Passamaquoddy, Maliseet, and Micmac—formed the Wabanaki alliance to increase their political power with European nations, and to resist the neighboring Iroquois Confederacy. The Wabanaki occupied territory in what is now Maine, New Hampshire, and Vermont. Representing the easternmost tribes in North America, Wabanaki means "people of the dawn."

This background information was drawn from labels and a brochure produced in conjunction with the exhibition Spirit of the Basket Tree: Wabanaki Ash Splint Baskets from Maine curated by Jennifer Sapiel Neptune (Penobscot).