* What do you notice when you look at this image?

* What materials were used to make this work of art?

* Can you read the words written on the lined paper underneath the drawings?

* How would you describe the artist’s style? 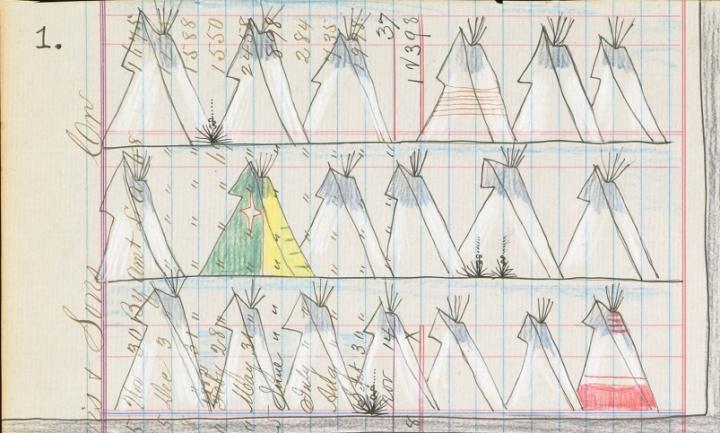 * How is this drawing organized?

* What is going on in each quadrant of the work?

* The paper in this work of art seems to have been used before. Can you guess by whom? For what?

* Why might a Native American artist want to draw on top of a piece of paper that has been written on by a European American?

* Do the four images in this work tell a story? If so, of what?

* Does the artist have a point of view in this work? An opinion?

* Dwayne Wilcox's work consciously mimics the tradition of ledger drawing that dates back to the middle of the nineteenth century, and before that to a tradition of drawing on rocks, buffalo hides, and tipis.

* Compare Dwayne Wilcox's image to a ledger drawing made in 1860. (An image is included at the end of this resource.) How are they the same? How are they different?

* With their ledger drawings, Native peoples were creating a visual "record" of their history on top of a written record of European American affairs. Why do you think Dwayne Wilcox wanted to copy this style of art making in the twenty-first century?

* What does this image seem to be saying about the intertwined history of Native Americans and European Americans?

* Do you think this work of art is successful and well done? Why or why not?

* Are the ideas in this image powerful to you?

Ledger drawing is an art form in which Native American artists draw images on paper, often taken from European American accounting, or ledger, books. It is connected with the tradition of Plains Indian art in which images of war and hunting were inscribed onto rock, buffalo hides, and tipis by warrior-artists to memorialize their accomplishments and to designate their positions in the tribe. As increased contact with Euro-Americans from the 1850s through the 1870s led to the transformation of life on the Great Plains, these male warriors-artists turned to drawing on the balance sheets in ledger books that they obtained from white settlers, traders, and the military. Recognizing that ledger books were used to record important information, Natives appropriated them as a means to keep track of heroic deeds, recording battles between Natives and non-Natives as well as nostalgic scenes of pre-reservation life. During the reservation era these drawings continued to serve as personal narratives but also as a chronicle of the transitions brought on by captivity, life on the reservation, and the subjugation of Native cultures. Contemporary ledger artists use visual storytelling as a means of exploring both their cultural heritage and issues of present-day Native experience.

Dwayne Wilcox's drawings apply a satire and irony to the challenges facing Native Americans and reveal Wilcox's keen sensitivity to Native life, both historic and contemporary. In this four-part composition, he presents a visual narrative of the transition from pre-reservation life to the present-day reality of many Native Americans. In the first panel, located in the upper left, he depicts a Native encampment prior to European contact. The second panel, in the upper right, depicts Natives fighting for "what little they had to lose—everything." The third panel, in the lower left, shows a reservation-bound Native couple with the man holding a box containing government rations. The fourth panel, in the lower right, alludes to the disproportionate number of Natives that have served in the military relative to all other ethnic groups. As Wilcox states, "A lot of young Native boys are fighting for their country's freedom and they still don't have their freedom, and there's no American dream waiting for them when they return."

Contemporary ledger artists like Dwayne Wilcox celebrate the cultural perseverance and survival of this art form through deliberate references to historic ledger drawing in their own work. These works often critique the contested histories of Native America and explore issues of Native identity. Some contemporary ledger artists use historical photographs and documents as a means of reassessing and reclaiming their family and tribal histories. Others, like Wilcox, use ironic humor to compel the viewer to confront cultural stereotypes.