This resource will allow you to lead your students through careful observation and analysis of a type of print called a mezzotint.

INTRODUCTION
This image was created by Valentine Green, an English printmaker, in 1769. Green was hired by the publisher John Boydell to reproduce a painting by Joseph Wright of Derby entitled Experiment on the Air Pump. In this scene, a family has gathered around to test an air pump and explore the newly discovered role of oxygen to support life. If the pump works correctly, all of the air will be sucked out of a glass chamber into which a bird has been placed, and the bird will die. The image reflects and comments upon the active interest in science in the eighteenth century.

Green used a relatively new printmaking process known as mezzotint for this work. Mezzotints were uniquely capable of capturing, in black and white, the textures and qualities of oil painting. Prints were produced by publisher and made available at an affordable price so that many people were able to see and own the images.

Ask students to look carefully and describe everything they see.

* What do you see or notice when you look at this scene? 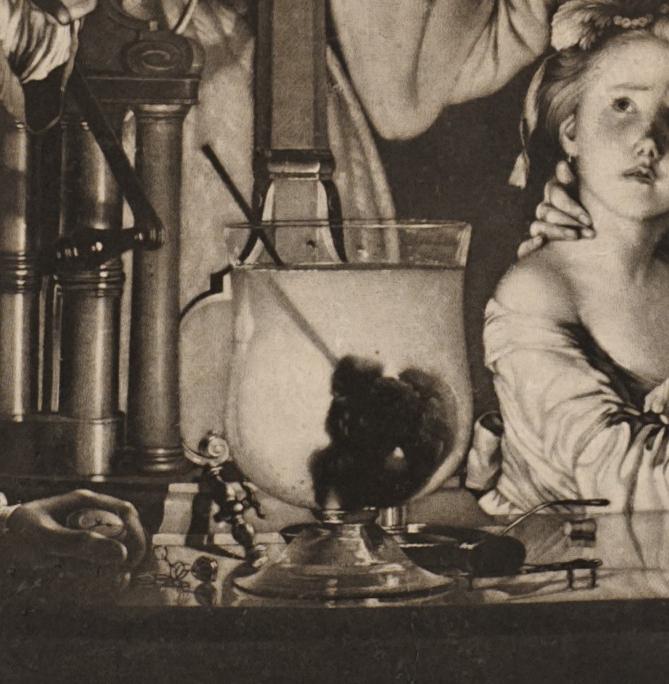 * What do you notice about the light? What does it illuminate? What is cast into shadow? 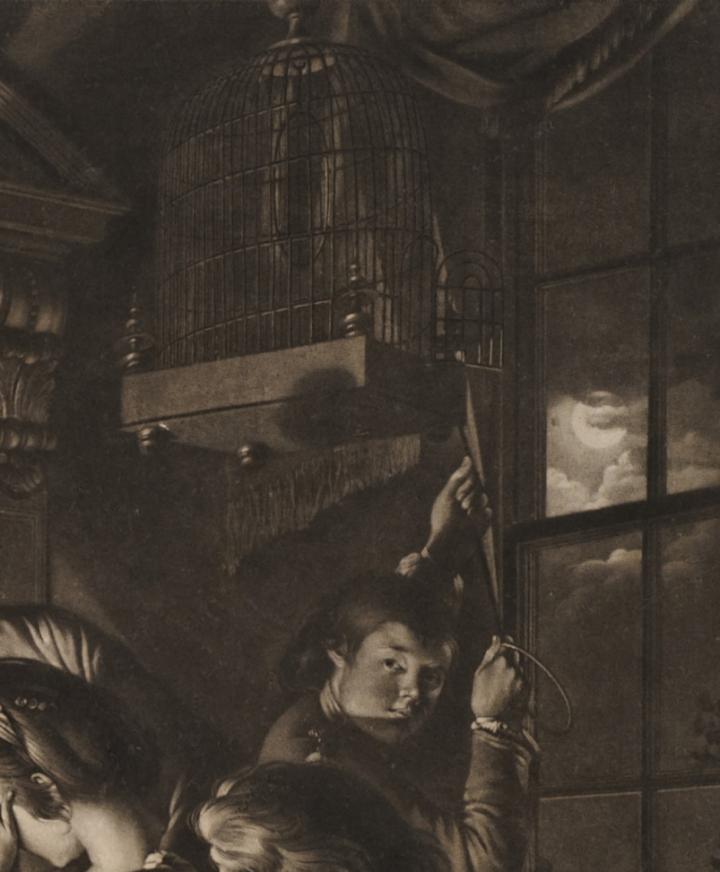 * What do you notice in the background? Outside the window? 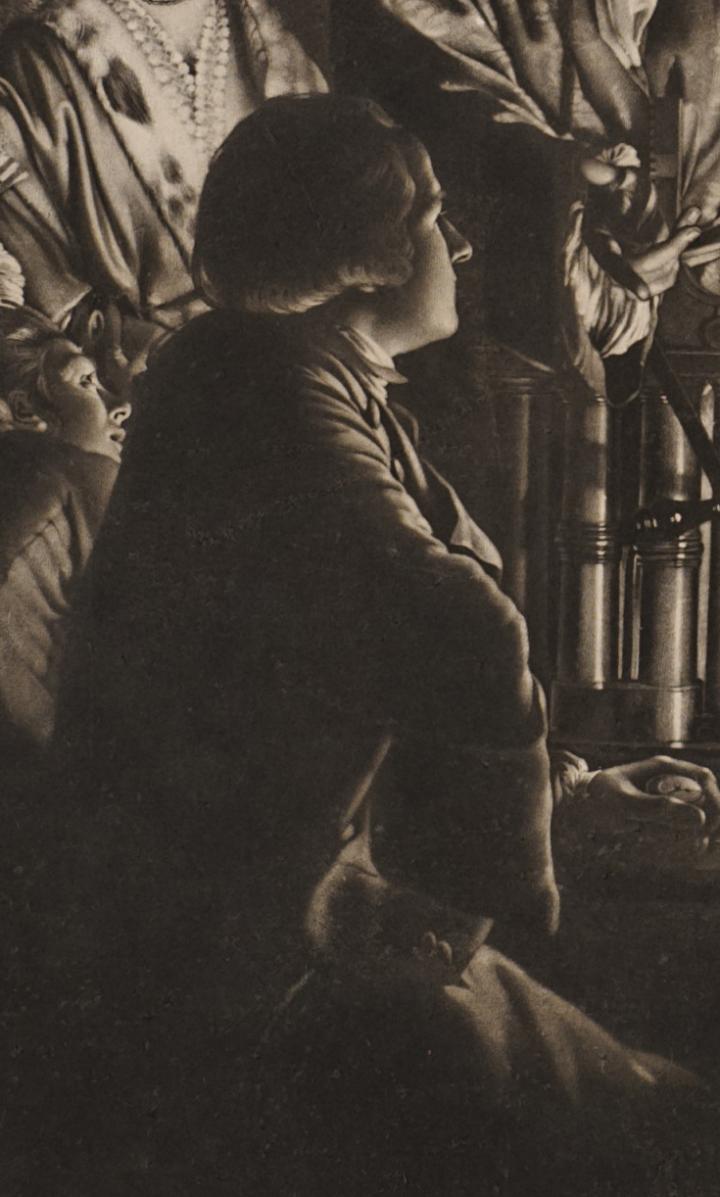 * Examine each group of figures. Describe their dress, pose, and facial expressions. How is each person responding to the experiment? 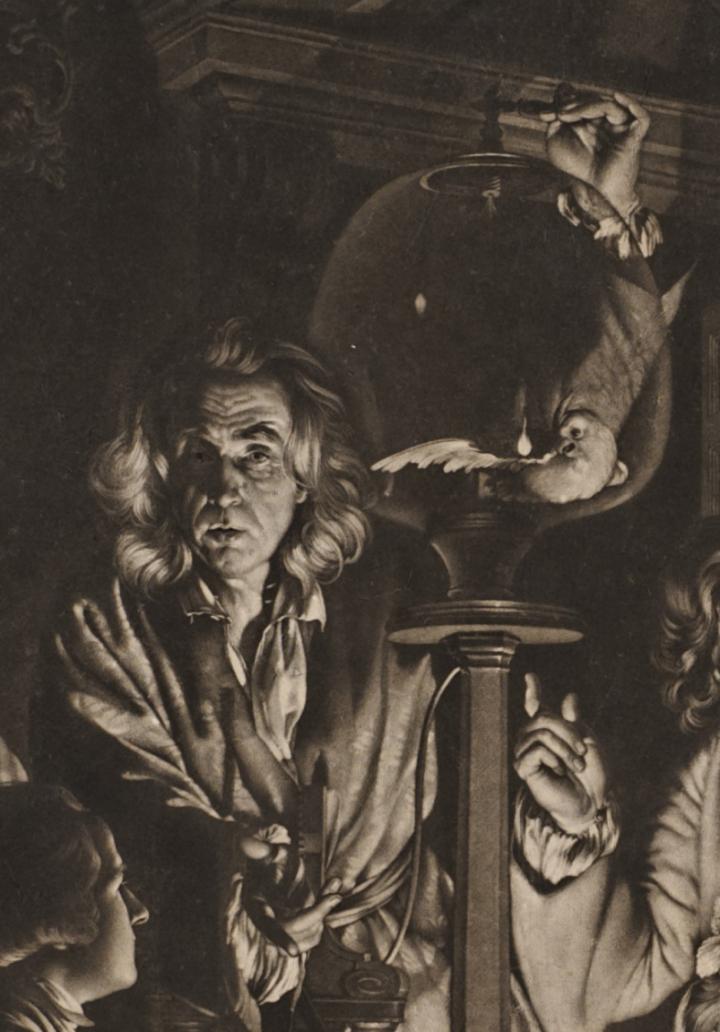 * What is the role of this man?

* Mezzotints capture textures beautifully. Name some of the different textures shown in this work.

* Where does this experiment seem to be taking place? How does the lighting affect the mood of the scene?

* Why do you think each of these figures was included in the painting? What is the role of each? Do they have a relationship to one another?

* What do you think will happen next?

* What does this image tell us about how ordinary people experienced science in the eighteenth century?

* What is the artist challenging us to think about the "new age of science" based on this image?

* This image was very popular and sold very well. Why do you think that was the case?

* How do you think the availability of mezzotints changed the art market in England in the eighteenth century?

* Do you think this print is successful and well done? Why or why not?

* Do the ethical issues raised in this image still resonate today? How so?

Before the advent of lithographic and photomechanical reproductions, mezzotints were the favored medium for publicizing English paintings. First invented by a German printmaker in the mid-seventeenth century, the mezzotint—from the Italian mezzo ("half") and tinta ("tone")—was a tonal method better able to represent the painterly qualities of light and shadow than traditional printmaking techniques, such as engraving and etching.

Although generations of painters had used prints to promote their compositions, the establishment of regular public exhibitions in London in the second half of the eighteenth century significantly increased popular demand for inexpensive and widely available editions of fashionable pictures. Artists and collectors were especially attracted to the dramatic appearance of mezzotints.

The painter Joseph Wright of Derby used printmaking aggressively as a way to promote his work. Fourteen of the paintings that he exhibited in London between 1765 and 1772 were printed—twelve of them as mezzotints. The prints served as a lasting record of the artist's most notable examples of his early "candlelight pictures," which were characterized by spectacular effects of natural and artificial light. Most of these works were large, multi-figure interior scenes, generally produced on speculation for sale to the general public. In many instances the prints were issued within six months after the paintings had been exhibited, and they were often praised by critics as well.

Several of the earliest mezzotint versions of Wright's works were themselves exhibited, including Valentine Green's Experiment on the Air Pump, self-published in 1769 as the printmaker's grandest and most complex print to date. Green faithfully rendered the depiction of a variety of poses and facial expressions, heightening the nighttime drama of a family observing a traveling lecturer as he demonstrates the potentially lethal effects of creating a vacuum in an air pump. The image's quality, delicacy, and precision soon attracted the attention of the publisher John Boydell, who purchased the plate immediately after the exhibition of Green's mezzotint and reissued it in late June of the same year.

In this scene, a family has gathered to witness and learn about various experiments in pneumatic physics, the scientific study of air and other gases. This test involving a bird had become commonplace by this time. The air pump was invented in Germany in 1650; by the mid-eighteenth century, it was a standard device in science lectures. (The first three technical apparatuses that Dartmouth College obtained in the late eighteenth century were an orrery for tracking the movement of the planets, a telescope, and an air pump.) The image highlights the active interest in science in the second half of the eighteenth century.

Experiment on the Air Pump is perhaps Wright's greatest achievement, a large and complex narrative that addresses the contemporary interest in science while subtly raising issues of ethics and morality. Recent interpretations—noting the "curious human skull" in the glass jar on the table—suggest that the picture has a vanitas theme, a reminder that "death is inevitable and its moment unpredictable." Although the composition appears to represent the advance of scientific knowledge, the subject is somewhat gruesome. The experiment is depicted at its most crucial moment: the bird, deprived of air, has fallen to the bottom of the glass globe, and the lecturer can either open the stopcock in time to save the bird or else keep it shut, which would lead to its death.