* What do you see or notice when you look at this image? 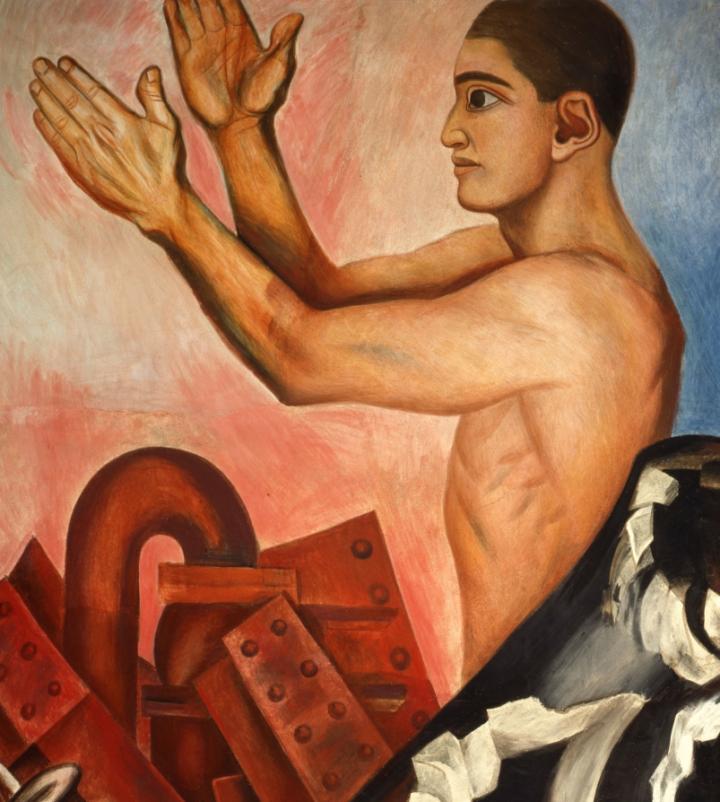 Become more and more specific as you guide your students’ eyes around the work with questions such as:

* What do you notice about the figure? 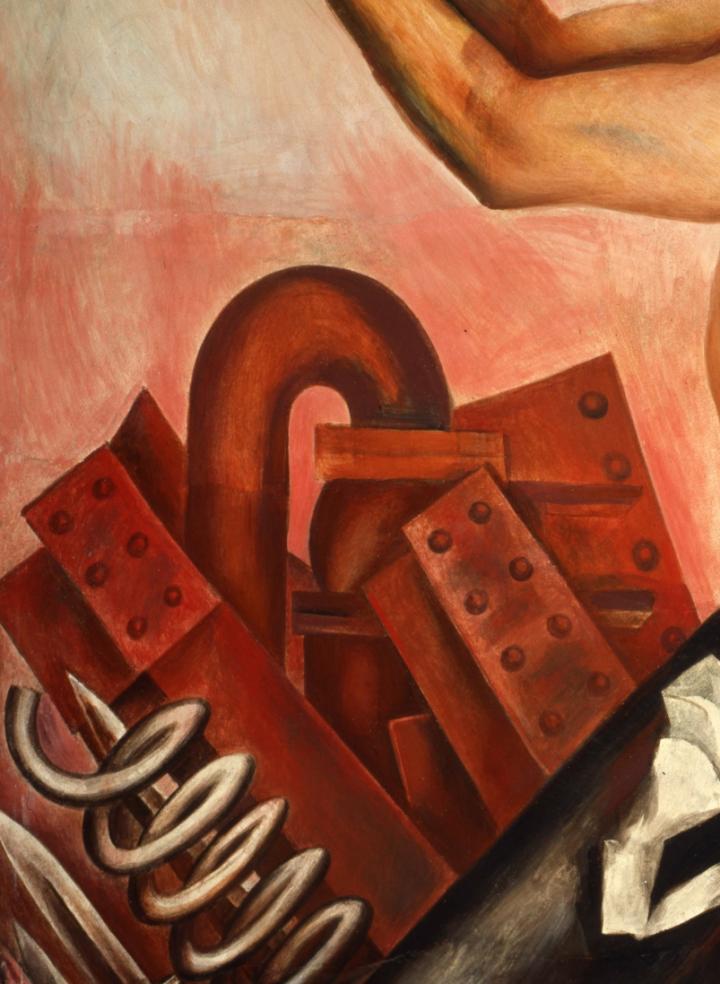 * What do you notice about the objects beneath him? 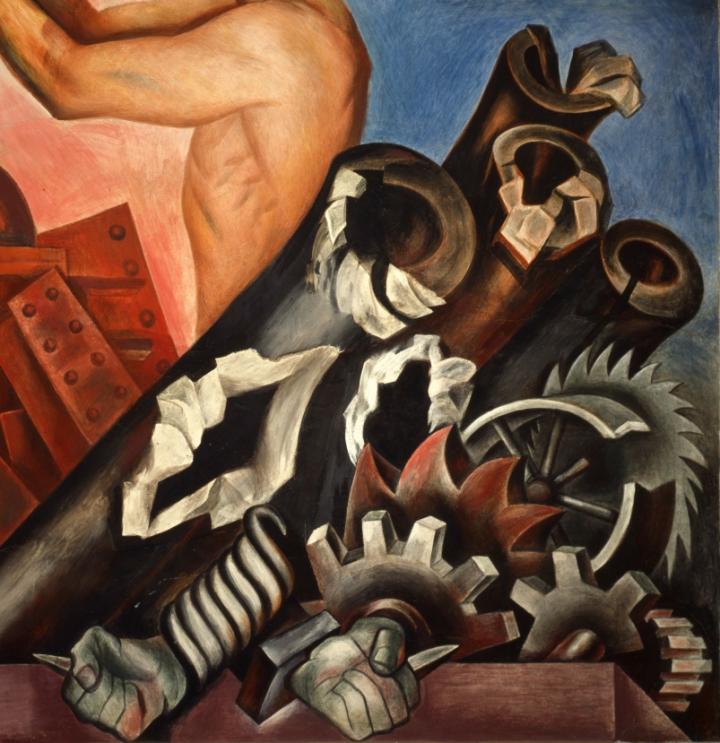 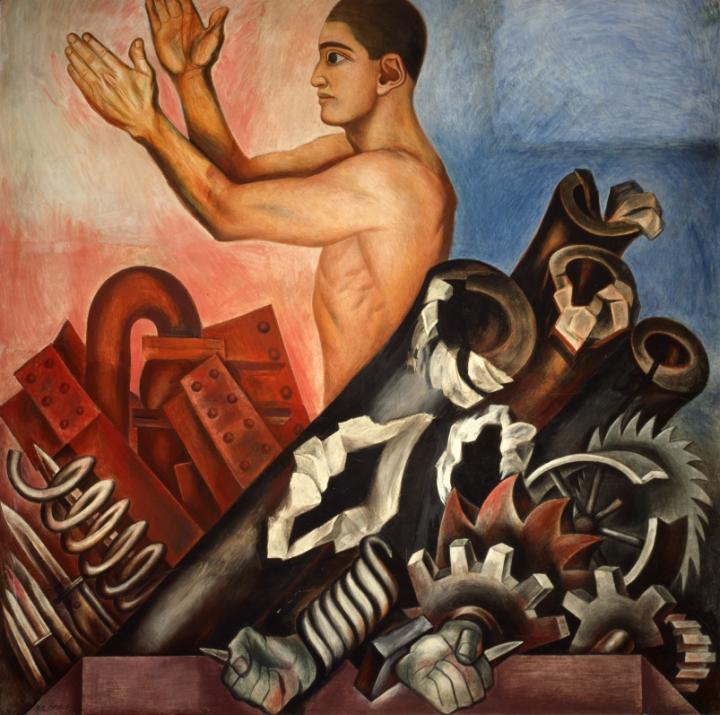 * What do you notice about the artist’s style? The way he arranged the figure and objects in this composition? The shapes he created? The colors he used?

Once you have listed everything you can see about the object, begin asking simple analytic questions that will deepen your students' understanding of the work. For instance:

* Why do you think the figure is nude?

* What does his pose suggest about him?

* What do you think the relationship is between the man and the objects below him?

* Does the artist's style remind you of any other type of art you have seen?

* What does Orozco seem to be saying about the relationship between man and technology?

* What world events and changes in technology in the preceding decades might have contributed to Orozco's attitude? (Consider the deadly technology used in World War I, the increasing numbers of people working in mechanized and often dangerous factories, the changing landscape of New York City as skyscrapers are erected, etc.)

* Do you think this fresco is successful and well done? Why or why not?

* Are the ideas in this image still relevant today?

José Clemente Orozco, Mexican, 1883–1949
Man Released from the Mechanistic to the Creative Life, 1932
Fresco
Commissioned by the Trustees of Dartmouth College; P.932.12

José Clemente Orozco was one of the most important artists of the twentieth century. He began formal art studies at the San Carlos Academy in Mexico City, where he came into contact with major figures in the Mexican artistic renaissance of the first decades of the century. Orozco began his career as a political caricaturist. By the time he came to the United States at the age of forty-three, Orozco had become a public mural painter and was recognized as one of the leading artists within the mural movement fostered by the Mexican government following that country's revolution (1910–17).

In 1927, pessimistic about prospects for future Mexican commissions and drawn by growing U.S. interest in Mexican art and culture, Orozco became the first of the Mexican muralists to journey north in search of international audiences and recognition. He stayed in the United States for seven years, using New York as his home base, and began one of the most significant and productive periods of his career. While he continued to paint, exhibit, and sell works that focused on themes of the Mexican Revolution and landscape, North American culture had a deep impact on his work and inspired him to explore new urban themes, modern artistic forms, and printmaking.

In early 1932, Orozco received an invitation from the Dartmouth College art department faculty to visit the campus and demonstrate the "true art of mural painting." Orozco painted this small mural, entitled Man Released from the Mechanistic to the Creative Life. Originally intended as the focal point of a mural cycle on the theme of the Greek mechanical genius Daedalus, Orozco described it as "post-war" in theme. It clearly shows Orozco's concerns about the mass regimentation of modern society following World War I. He stated in a press release dated May 25, 1932, that the fresco "represents man emerging from a heap of destructive machinery symbolizing slavery, automatism, and the converting of a human being into a robot, without brain, heart, or free will, under the control of another machine. Man is now shown in command of his own hands and he is at last free to shape his own destiny."

The creation of a true fresco (an Italian word meaning "fresh") is a time-consuming, technically demanding, and highly complex process. The artist uses mineral pigments dissolved in water to paint directly onto a layer of specially prepared wet plaster (called intonaco in classical Italian technique) that has been applied over base layers of dry plaster (arriccio). Because the painting must be completed while the intonaco is wet, the artist carefully plans the design and composition in advance. The painter works quickly on a small area of the wall called a giornata, an Italian word indicating the amount of work that can be completed in a single day. The artist is able to make corrections while the plaster is still wet or can use tempera to make small changes on the dry surface; to correct a major error, though, the artist must chip off the entire area and begin again.

While preparing for this mural, Orozco first saw the vast, empty walls of the nearby library's reserve reading room and proposed to paint an extensive mural cycle. Thus began an association with Dartmouth College that lasted over two years and resulted in the creation of The Epic of American Civilization, Orozco's largest and most ambitious mural in the United States.

Orozco's most enduring U.S. legacy lies in his three murals, located at Pomona College in Claremont, California (1930), the New School for Social Research in New York City (1930–31), and at Dartmouth College (1932–34). These murals and those of other Mexican artists working in the United States inspired the public works programs set up under Roosevelt's New Deal during the 1930s, as well as artists working from the 1960s to the present in community mural movements.