* What do you notice when you look at this pot?

Become more and more specific as you guide your students’ eyes around the work, with questions such as:

* Where are its handles?

* Where is the pot wide? Where is it narrow?

* How is the pot decorated?

* What colors do you see? What patterns? 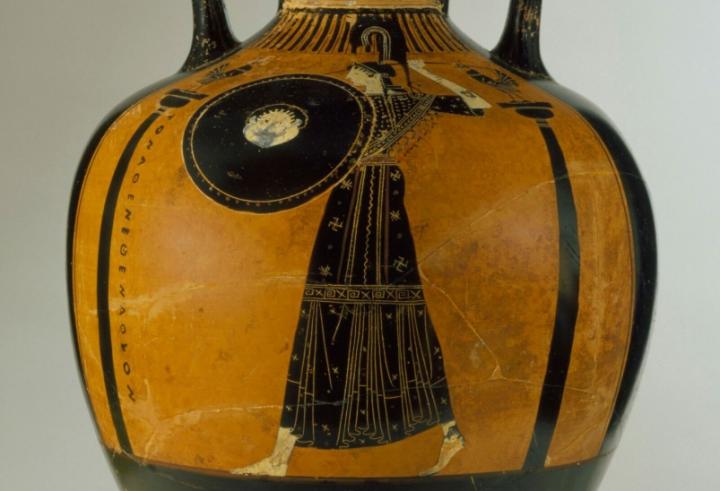 * Its pose? Dress? The objects it is holding and the objects surrounding it? 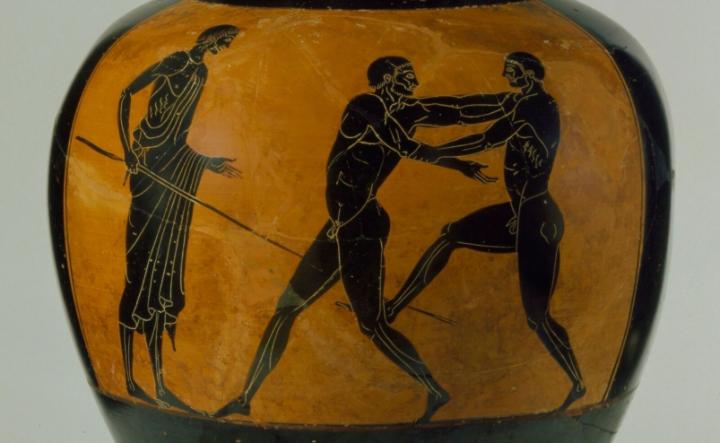 Now, look carefully at the back (reverse) of the pot.

* What do you notice about the figures on this side of the pot?

* Their poses? Dress? The object one of them is holding in his hand?

* What might the figures on the back of the pot be doing? What is the role of the man standing beside the two grappling figures?

* How are the figures represented? Why might the grappling figures be nude? How has the artist delineated the muscles on their bodies? What do you notice about their faces?

* Who might the figure on the front (obverse) of the vase be? Is it a male or a female? How is this figure different from the figures on the other side? What does the information the artist provided suggest about the identity of this figure?

After each response, always ask, "How do you know?" or "How can you tell?" so that students will look to the work of art for visual evidence to support their theories.

* This vase is over two feet tall and would be extremely heavy when filled with olive oil. What does the size, weight, and skill required to make this vase, tell us about the ways in which the ancient Greeks valued athletics?

* What else does this Greek amphora tell us about life in ancient Greece? (Consider clothing, the arts, and the relationship between ancient Greeks and their gods.)

* Do you think this amphora is successful and well done? Why or why not?

* Do you like this work of art? How does it relate to your life and your culture?

This black-figure amphora,1 which is over two feet tall, served as a prize at the Panathenaic games in Athens and is decorated with a representation of Athena, warrior goddess and patron of Athens. Beginning in 566 B.C.E., games were held every four years as part of the great festival, or Panathenaia,2 in her honor. Vessels such as this usually contained oil from the olive trees sacred to the goddess.

As on most of these vessels, Athena stands between two Doric columns surmounted by roosters, which may refer to her father, Zeus. As mythology recounts, she was born fully armed from the forehead of Zeus and, on becoming his favorite child, was entrusted with both his aegis (protective cloak) and thunderbolt. Her shield is adorned with the Gorgon's head, given to her by Perseus, which has the power to turn all who look at it to stone.

Panathenaic amphoras traditionally represent Athena on one side, and on the reverse, the event for which the vase was awarded. It is uncertain if the figures on the reverse of this piece depict wrestlers or pankratists, contenders in a more brutal event that combined both boxing and wrestling. The draped figure to the left is either a trainer or a judge of the games. This amphora is the work of the Berlin Painter, one of the most accomplished vase painters of the period and so named for his magnificent red-figure amphora in the collection of the Berlin Museum.

1. Amphora: a two-handled jar with a narrow neck used by the ancient Greeks and Romans to carry wine or oil.