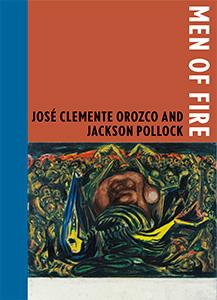 “The Hood’s Men of Fire: José Clemente Orozco and Jackson Pollock, organized by Sarah Powers of the Hood with Pollock expert Helen Harrison, reveals that many of the pictorial strategies employed by Pollock in his celebrated monumental canvases of the late 1940s to early 1950s can be traced to his intensely charged easel-size paintings from the brief period, 1938–41, when this quintessentially American artist was haunted by Orozco’s macabre visions of skeletons and ritual sacrifice.” —Wall Street Journal

In 1936, Jackson Pollock traveled to Dartmouth College to view José Clemente Orozco’s mural The Epic of American Civilization, which had been unveiled in Baker Library two years earlier. This volume is the first scholarly foray into the artistic relationship between the Mexican muralist and the American abstract expressionist. The deep impact that the imagery of these frescoes had on the young artist is demonstrated by the drawings and oil paintings that Pollock made after this visit. In these works Pollock explored myth, ritual, and the creative and destructive power of fire in ways directly inspired by Orozco’s art. The essays in this volume examine the importance that Orozco’s work had for Pollock during this pivotal moment in his career and bring together for the first time the work of two of the most famous artists of the twentieth century.