European Art at Dartmouth: Highlights from the Hood Museum of Art 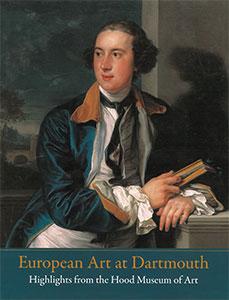 The earliest known European objects to arrive at Dartmouth were “a few coins and curiosities” obtained by President John Wheelock during his 1783 tour of England, France, Holland, and Scotland. The collection grew gradually throughout the nineteenth century, but the introduction of European art history courses in 1905 led to a significant expansion of the College’s holdings. A dramatic increase in gifts and acquisitions occurred after the 1985 opening of the Hood Museum of Art, which now has over 7,500 European works of art dating from the Renaissance to the early twentieth century.

This is the second in a series of catalogues from the Hood that will highlight different areas of the museum’s collection. European Art is the first book to present the quality and variety of these works in the museum, of which only a small portion is exhibited regularly though hundreds are used for teaching each year. The fully illustrated catalogue includes an introductory essay by T. Barton Thurber that documents the history of the formation of the collection as well as entries by thirty American and European scholars.

The core of the European collection, comprised of an exceptional array of works on paper, has been significantly enhanced in recent decades by the addition of a large number of remarkable paintings and sculptures. The catalogue highlights over 150 objects from the Italian and German Renaissance, the Dutch Golden Age, the Enlightenment and Romantic periods, and the early modern era. Featured artists include Andrea Mantegna, Pietro Perugino, Albrecht Dürer, Claude Lorrain, Rembrandt van Rijn, Jan Davidsz de Heem, Louis-Léopold Boilly, John Constable, Georges Braque, and Pablo Picasso. The European holdings of the Hood Museum of Art, now far more varied in nature, serve diverse audiences within and well beyond the College community and its environs.