American Art at Dartmouth: Highlights from the Hood Museum of Art 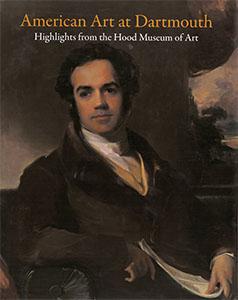 American art has long been a mainstay of the art collections at Dartmouth College, beginning with a gift in 1773 of a Boston-made silver bowl given by Royal Governor John Wentworth to the College’s founder, Eleazar Wheelock, in honor of the College’s first commencement. The collections have grown dramatically over the years—particularly since the opening of the College’s Hood Museum of Art in 1985. Today the American holdings of works dating before 1950 number around eight thousand pieces.

This is the first in a series of publications from the Hood that will highlight different areas of the museum’s collections, including European, Native American, and contemporary art. American Art is the first book to highlight the breadth and depth of the American holdings, only a tiny fraction of which are on view in the museum’s galleries at any one time. The 256-page fully illustrated book features an introductory essay by Barbara J. MacAdam that surveys the formation of the collection and its changing focus and function over the course of Dartmouth’s more than two-hundred-year history.

Whereas the College initially collected primarily American portraits to commemorate Dartmouth luminaries such as Daniel Webster, the collections broadened as the College’s art department developed in the early twentieth century. The American holdings of the Hood Museum of Art, now far more varied in nature, serve diverse audiences within and well beyond the College community and its environs. The catalogue comprises individual entries and color illustrations for more than two hundred works from the American collections dating from around 1705 to 1950, many of which have never before been published. This beautifully produced catalogue will include works by Winslow Homer, Georgia O’Keeffe, Augustus Saint-Gaudens, James McNeill Whistler, Thomas Sully, Augusta Savage, and Jackson Pollock, among others. Works are presented according to media: painting, sculpture, works on paper, and decorative arts.