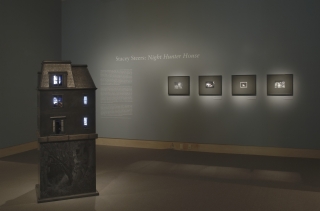 Stacey Steers
August 25, 2012, through January 06, 2013
Night Hunter House, a recent Hood acquisition now on view for the first time, is by Denver-based multimedia artist Stacey Steers. The dollhouse is conceived around and incorporates segments from Steers's sixteen-minute handmade film Night Hunter (2011) on ten small HDTV screens embedded in the house. Visitors who peek into the rooms through the house's windows are exposed to a surreal world filled with snakes, giant moths, pulsating eggs, and strange happenings. Silent film star Lillian Gish (1893–1993) has been transported from several of her best-known films to become the dweller of the house and the film's protagonist through Steers's expert collage artistry.

Text as Image/Image as Text
November 03, 2012, through December 02, 2012
The written narrative is the most valued form of knowledge production throughout modern Western history. This has significant implications for, among others, African American slaves, who were systematically denied participation in written discourse. It is not only a question of who has written history, but more importantly, who can? And how? With this background as a rich framework for critique, text as image has in turn become a powerful tool for artists interested in illuminating the dominant ways of manufacturing narratives and claiming knowledge. 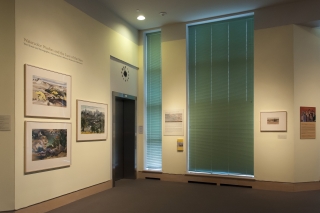 The Climate and Demographics Informing the California Watercolor

Watercolor Washes and the Lure of the Sun
September 29, 2012, through October 28, 2012
From the 1930s to the 1960s, a group of watercolorists based in Southern California responded to the region's distinctive environment by creating primarily large, colorful watercolors of the local scene, painted on the spot outdoors. These generally upbeat, optimistic images celebrated the Edenic California landscape, despite the dramatic demographic and economic forces that were already altering both the physical characteristics and social mosaic there. 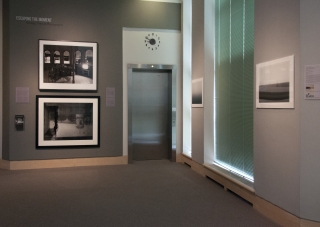 Escaping the Moment
August 13, through September 16, 2012
The weakness of human sight—its flickering hesitation and intermittent inattentiveness—gives way to the verity of the apparatus's machinic capture. Photo-graphia: one writes the light of reality, burning it into film. With these qualities, photography is still often said to be about holding on to lost moments. 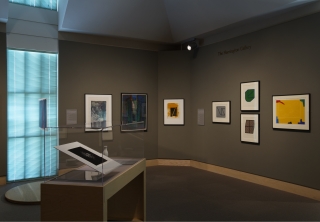 In 2008, the Hood Museum of Art was selected as the New Hampshire museum recipient of fifty works from the Dorothy and Herbert Vogel Collection. Dorothy and Herbert Vogel are somewhat unusual art collectors. Now retired, Herb worked for the U.S. Post Office and Dorothy was a librarian. After their marriage in 1962, they developed a deep interest in the New York contemporary art scene. They began collecting and, using only their civil servants' salaries, acquired over four thousand objects. The Vogels befriended many young artists, many at the beginnings of their careers, and often purchased works on paper in order to store them more easily in their modest apartment. Their collection is strong in minimal and conceptual art, especially drawings, but moves beyond those categories. Much of the Vogels' collection was given to the National Gallery of Art in Washington, D.C., but in 2007 they decided to distribute 2,500 works nationally. Dubbed the "50X50 project," they donated fifty works to one institution in each state. The Hood Museum of Art was honored to be the New Hampshire institution designated to receive this important gift. 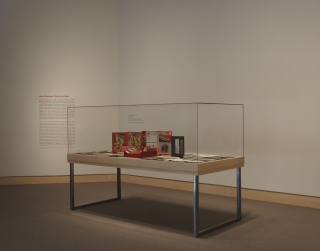 The Box in a Valise

Marcel Duchamp
April 07, 2012, through August 26, 2012
Marcel Duchamp described his Boîte-en-valise (Box in a Valise) as a “portable museum” that would allow him to carry around his life’s work in a traveling box.  The artist spent five years, between 1935 and 1940, recreating his oeuvre in miniature through photographs, hand-colored reproductions, and diminutive models.  These facsimiles of the artist’s major paintings, drawings, and sculpture were then placed in imitation-leather boxes or valises that he would spend the rest of his life assembling. Duchamp’s most significant works are cleverly arranged inside each box like a traveling salesman’s wares; open the lid and you find a treasure trove of art objects all reproduced on a miniature scale. The Hood Museum of Art recently acquired an important example of the Box in a Valise edition. This work, which the artist housed in a red linen-lined box about the size of a large attaché case, will be shown at Dartmouth College for the first time in this installation.