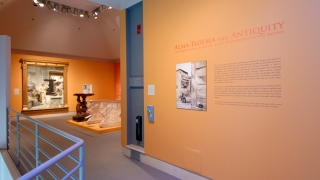 Alma-Tadema and Antiquity
June 28, 2008, through September 28, 2008
In conjunction with exhibitions in Naples, Italy, Washington, D.C., and Los Angeles, the Hood Museum of Art has developed a focused display centered on its most important nineteenth-century European, Sir Lawrence Alma-Tadema's (1836-1912) The Sculpture Gallery of 1874.  While other venues emphasize the importance of the painting in the context of the artist's nostalgia for the past (the Museo Archeologico Natzionale in Naples) and the legacy of Pompeii and the Roman villa (the National Gallery of Art and the Los Angeles County Museum of Art), the Hood's "dossier exhibition" highlights the originality of the subject and its complex construction.

Joan Miro and Dorothea Tanning's Surrealist Exlporations of the Unconscious

A History of Viewing from the Renaissance to the Present Day

The Art of Spectatorship
January 19, 2008, through April 06, 2008
This companion to the course Introduction to Art History II focused on five topics- devotional images, artistic presence in a work of art, voyeurism and the female nude, portrayals of social class and conflict, and artistic quotation and appropriation-surrounding the changing experience of viewing art from the Renaissance to the present day. Images such as Saint Veronica's Sudarium (about sixteenth century), which presents the miraculous transference of Christ's image to Veronica's handkerchief upon route to the crucifixion, appeared alongside Dana Salvo's Mendoza Household Shrine (about 1995), a photograph of a homemade altar with plastic fruits and artificial lights. Other groupings included images of nude classical goddesses and Reginald Marsh's mid-twentieth-century tempera paintings of a New Jersey striptease. Depictions of class convergence in city streets by artists ranging from Honore Daumier to John Sloan further explored the exhibition's themes.

The Art of the Stripe

Sean Scully
January 12, 2008, through March 09, 2008
Sean Scully has moved steadily over the past three decades to his current position in the highest rank of painters working in the abstract tradition. The recent American touring exhibition Wall of Light, which concluded to very positive reviews at the Metropolitan Museum of Art in New York, is currently being succeeded by a major touring show in Europe. Scully began painting in the late 1960s and early 1970s amid the dominance of Op Art in Britain. He then moved to America, where, after five years of struggle, he found his painterly voice in the stripe. Scully has relentlessly pursued the possibilities offered by his exploration of colored stripes, always remaining true to his assertion that "the stripe is a signifier of modernism." The Hood's exhibition explores Scully's work since the early 1970s and culminates with the first showing in America of the artist’s beautiful series Holly, made in memory and in honor of his mother. Along with over twenty large oil paintings, a small selection of photographs demonstrates Scully's fascination with the architectural structures of our built environment, the inspiration of so much in his abstract paintings.