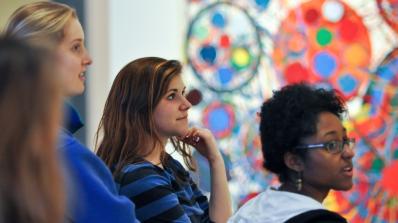 Sean Scully has moved steadily over the past three decades to his current position in the highest rank of painters working in the abstract tradition. The recent American touring exhibition Wall of Light, which concluded to very positive reviews at the Metropolitan Museum of Art in New York, is currently being succeeded by a major touring show in Europe. Scully began painting in the late 1960s and early 1970s amid the dominance of Op Art in Britain. He then moved to America, where, after five years of struggle, he found his painterly voice in the stripe. Scully has relentlessly pursued the possibilities offered by his exploration of colored stripes, always remaining true to his assertion that "the stripe is a signifier of modernism." The Hood's exhibition explores Scully's work since the early 1970s and culminates with the first showing in America of the artist’s beautiful series Holly, made in memory and in honor of his mother. Along with over twenty large oil paintings, a small selection of photographs demonstrates Scully's fascination with the architectural structures of our built environment, the inspiration of so much in his abstract paintings.

This exhibition was organized by the Hood Museum of Art and is generously funded by Yoko Otani Homma and Shunichi Homma M.D., Class of 1977; the Marie-Louise and Samuel R. Rosenthal Fund; the Hansen Family Fund; the Ray Winfield Smith 1918 Fund; and the Leon C. 1927, Charles L. 1955, and Andrew J. 1984 Greenebaum Fund.

Sean Scully: The Art of the Stripe