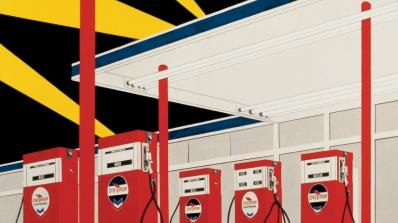 Robert Rauschenberg has often been called one of the most influential American artists of the latter half of the twentieth century. He is best known for his assemblage work, in which he combined painting with found objects. While his art retained many expressionistic and painterly traits, his frequent use of materials from popular culture made him an important transitional figure between abstract expressionism and Pop Art. Rauschenberg regarded his methods as comprising a collaboration with materials rather than a conscious manipulation of them. This open-minded attitude toward art led him to experiment with a greater range of media than perhaps any other contemporary artist.

Rauschenberg's residency at Dartmouth College in 1963 marked a transitional period in his career, during which he sought alternatives to assemblage by experimenting with the printmaking process. The high level of cooperation inherent in printmaking made it especially suited to Rauschenberg, who was prone to collaborative ventures. Over the years, he worked with various printmakers and also choreographers, such as Merce Cunningham and Trisha Brown, and also arranged and performed his own pieces.

Rauschenberg's print collages incorporate both his aesthetic vision and his preoccupation with the historical, cultural, and personal layers of meaning embedded in language and images. In some cases, it helps to understand the context informing them, but this does not make their immediate aesthetic appreciation or personal interpretation any less relevant.

The installation presents eight prints by Rauschenberg, from a total of thirty-five in the collection. The selection constitutes a brief but representative sample of the artist's achievements within the medium from 1963 to 1973.

The installation is presented in conjunction with performances by Trisha Brown Dance Company at the Hopkins Center for the Arts on September 25 and 26, 2009, of Foray Forêt (1990), with costumes by Rauschenberg.