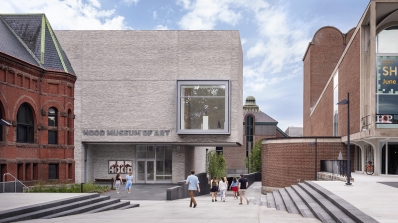 The Dorothy and Herbert Vogel Collection

In 2008, the Hood Museum of Art was selected as the New Hampshire museum recipient of fifty works from the Dorothy and Herbert Vogel Collection. Dorothy and Herbert Vogel are somewhat unusual art collectors. Now retired, Herb worked for the U.S. Post Office and Dorothy was a librarian. After their marriage in 1962, they developed a deep interest in the New York contemporary art scene. They began collecting and, using only their civil servants' salaries, acquired over four thousand objects. The Vogels befriended many young artists, many at the beginnings of their careers, and often purchased works on paper in order to store them more easily in their modest apartment. Their collection is strong in minimal and conceptual art, especially drawings, but moves beyond those categories. Much of the Vogels' collection was given to the National Gallery of Art in Washington, D.C., but in 2007 they decided to distribute 2,500 works nationally. Dubbed the "50X50 project," they donated fifty works to one institution in each state. The Hood Museum of Art was honored to be the New Hampshire institution designated to receive this important gift.

The Hood is marking the Vogels' gift with the exhibition The Dorothy and Herbert Vogel Collection: Fifty Works for Fifty States: New Hampshire, which includes artists such as Richard Nonas, Robert Berry, and Lynda Benglis. Much of the Hood's gift consists of works on paper, including a small abstraction in graphite and silver paint by Michelle Stuart titled July, New Hampshire. Intimate pastels by Edda Renouf seem to glow gently, while curved hills undulate in Bill Jensen's gouache Terra Firma. Much of the work is done on sketchpad paper, giving it an informal feel. The gift includes two groups of works, the first a bound book of forty-three drawings by Jene Highstein, done in a spare minimalist style, and the second a series of delicate watercolors on lined notebook paper by seminal postminimalist Richard Tuttle. In contrast to these are two lively collages from Stephen Antonakos's Travel Collage series and a figurative painting by John Clem Clarke, an artist known for his pop art imagery, painted with a photo-realistic technique.