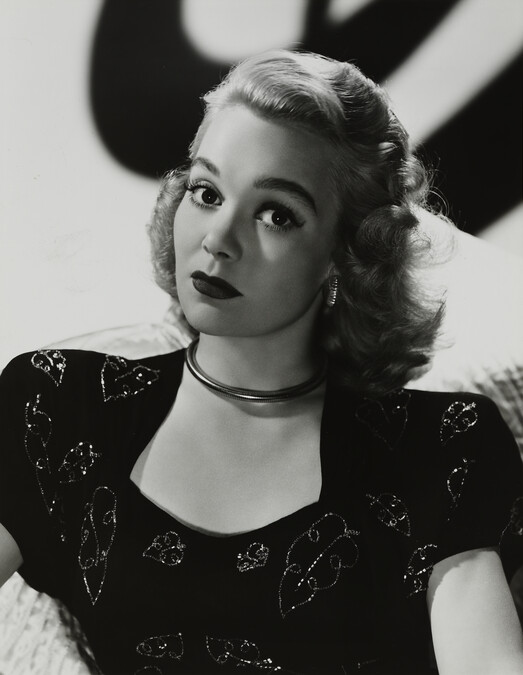 Hood Museum of Art, Dartmouth: Gift of Robert Dance, Class of 1977, in honor of Maurice Rapf, Class of 1935

Stamped, on reverse, upper right edge, in purple ink: 2532; Stamped, on reverse, upper left, in black ink: DELL PUBLISHING COMPANY, Inc. / Name [underline][inscribed, in graphite: Jane Wyman] / Received [underline][inscribed, in graphite: 1945] / Used Mag. [underline] Issued [underline]; typewritten text, on reverse, center, in black: PORTRAIT BY CLARENCE BULL [underlined] / Jane Wyman who gained fame for her comedy characterizations / on the screen, forgets glamour for her role as Ma Baxter in / "The Yearling," and hits "pay dirt." One of the plum port- / rayals of the year, Miss Wyman is seen as the poverty-stricken / downtroaden Florida backwoods woman who knows only poverty / and dirt during her lifetime. Love of her equally poor / husband and her young son help brighten her life. According / to Director Clarence Brown, Miss Wyman will be hailed by / moviegoers and critics alike for her portrayal of this woman. / As her co-star, Gregory Peck is seen in the role of Penny / Baxter and young Claude Jarman, Jr., is the Jody of the film. / Filmed in Techicolor, "The Yearling," based on Marjorie / Kinnan Rawlings best-seller was produced by Sidney Franklin / for Metro-Goldwyn-Mayer. / 2521 to 2535

Robert Dance; given to present collection, 2001.