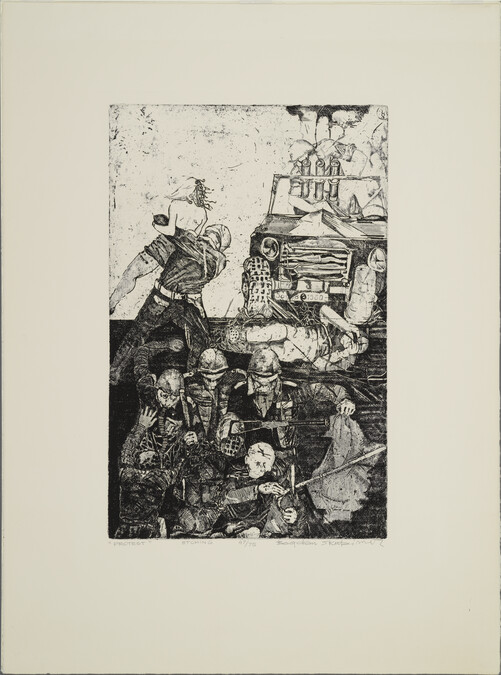 This print depicts several vignettes: a smashed military vehicle holds one figure while another lies before it on the ground; a man carries a partially clothed woman; and in the foreground three masked soldiers confront one figure with his hands up and another with a head wound. The middle soldier raises up his boot in a violent gesture. The print, created in 1967, references the Vietnam War, but the details are not precisely rendered. For example, the soldier in the left foreground wears a gas mask, but one that appears from an earlier era—World War I, or perhaps World War II—rather than from Vietnam. The helmets and masks of the soldiers in the foreground, along with the print’s title, Protest, also suggest violence against anti-Vietnam protestors in the United States, as well as that of the battlefield. Skupinski’s gestural style allows for multiple references and interpretations, emphasizing the turmoil and horror of conflict. Skupinski’s intentions are expressly anti-war. He writes “If I did not believe that art would be a vehicle to effect change or only a palliative against today’s civilization, then I would cease to be interested in it.“