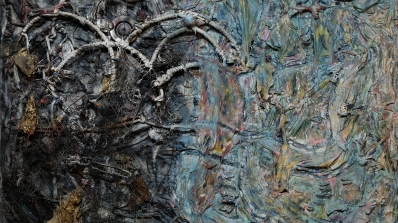 This year, the Hood Museum of Art made a major acquisition of ten works of art from the Souls Grown Deep Foundation that dramatically expands the story of American art we tell by including several African American artists from the southern United States. The acquisition encompasses paintings by Ronald Lockett, Mary T. Smith, Mose Tolliver, and Purvis Young; sculpture by Lonnie B. Holley and Bessie Harvey; a quilt by Louisiana Bendolph (from the renowned community of quilters in Gees Bend, Alabama); and both paintings and a sculpture by Thornton Dial.

The Souls Grown Deep Foundation (S.G.D.F.) was founded by the art historian William Arnett in 2010. Arnett had by then spent decades creating a vast collection of art by African American artists in the American South whom he had become quite close to over the years. Near the end of his own life, he established the S.G.D.F. to both share these artists' work and see their communities receive some financial benefit from its sale. His idea was that the S.G.D.F. would serve to transfer the artworks out of his own holdings and into museum collections around the world. The S.G.D.F. earns some money on these transactions, then funnels it back into the communities where the artists live or lived through targeted grants. Now up and running for over a decade, the foundation has had a fundamental impact on museums in the United States (and has started working with institutions in Europe as well).

The name, Souls Grown Deep, comes from the 1921 Langston Hughes poem "The Negro Speaks of Rivers," which concludes: "My soul has grown deep like the rivers"—an apt allusion to the artists Arnett collected. Though different in the specifics of their work and approaches, these artists have much in common, from their lived experiences growing up in the Jim Crow South to their immense creativity when it comes to translating found materials into their works. These works express dreams and fears, values and ideals, and they share profound observations about life. Operating without the benefit of a gallery or organized art market, most of these artists handled the promotion of their work on their own, often selling from their front yards to passersby.

Louisiana Bendolph (b. 1960) grew up in Gee's Bend, Alabama, a small community isolated from much of the world by virtue of its remote location, surrounded on three sides by a major river. The residents are mostly descended from enslaved Africans brought to this country in the 18th and 19th centuries. Her childhood was spent growing vegetables and cotton on the family farm. As she explains, she could only attend school on days when it was too rainy to work outside. Most other days, she and her siblings could see from their cotton fields the bus filled with children on its way to the schoolhouse without them.

Quilting was a skill and passion that passed from one generation to the next in Gee's Bend. In the early years, quilts were an efficient way to use scraps of leftover material that were too small for making clothes. Bendolph describes it as one of the only "fun" activities of her youth, but one she gave up for many years when the need for more quilts in the house subsided. Her return to the practice was inspired by an opportunity to be part of the first museum exhibition of quilts made in her community (Houston Museum of Fine Arts, 2002). Her work was not only on the wall but in the book that documented the show, and it was a revelation to her to think of these humble objects as art. She describes being immediately inspired to return to quilting, making her first drawings for future quilts on the bus ride home. The quilt now in the Hood Museum collection was made the following year. These days, she shops for her materials specifically to make her quilts, which she has come to accept as art just as she has accepted herself as an artist.

Bessie Harvey (1929–1994) approached her artwork from a place of deeply felt Christianity. One of ten children raised by a single mother, and herself a single mother of eleven, she said that she found the strength to carry on through her faith. Her special connection to the beings she finds in nature started with her childhood wanderings alone in the forest, and the wonder she felt there. Her awe crystallized into piety as she grew up, and her piety in turn shaped her artistic practice. She explained that God created all the figures she made, and her role was to discover these creatures and bring them to life. "God is the artist in my work," she explained, "nature and insects, they shape the work for me, because they belong to God." Her process involved searching the wooded rural environment near her home in Alcoa, Tennessee, for the forms held fast in root clusters, branches, and other natural objects. Her contribution—an extension of God's will for her—was to bring out these beings, to give them life. In Seat in the Kingdom (1987), we can see a widely varying group of souls enjoying the afterlife. Each one retains a strong resemblance to its original form, but each has also been altered by the artist to reveal its essence.

Christian faith informs many of the works in the Souls Grown Deep collection. Thornton Dial (1928–2016), whose work Heaven and Hell on Earth is illustrated on the front cover of the 2021 fall Hood Quarterly, returned to the theme throughout his life. In this painting, one in an extended series on this topic, he divides his world quite obviously left to right. Darker colors dominate the left side, while rich pastels of blue and yellow set the tone on the right. For Dial, the painting depicts the ever-present conflict between heaven and hell, but which side is which remains unclear. Before we jump to the conclusion that the left leans toward hell, note that opportunities abound there, as indicated by the small objects found among the twisted detritus of industrialized city life. On the other hand, peace and tranquility seem to have been associated with the colorful area, but there are not many references to work and productivity. On this question, Dial once remarked: "They're always together. We're living in both all the time."

Dial's art began as a part-time passion, but after he lost his job at the Pullman-Standard Plant (a onetime manufacturer of train cars) in the early 1980s, he turned his attention to a full-time art practice. His style merged the expressive use of found objects (as was common for artists in his circle) with a concern for large-scale social issues such as homelessness, war, and the omnipresent racism that impacted his life in Alabama. Dial would ultimately experience significant success for his art, living to see a retrospective of his work that traveled to several major museums between 2011 and 2013.

As a celebration of these acquisitions, the Hood Museum will share a small, focused exhibition on the work of Thornton Dial. He is the only artist in the Souls Grown Deep acquisition to be represented by multiple works. The exhibition will act as an introduction for our audiences to this amazingly rich area of American modern art and as a welcome for the works to their new home in our collection.

Thornton Dial: The Tiger Cat was organized by the Hood Museum of Art, Dartmouth, and generously supported by the Cissy Patterson Fund and the William B. Jaffe Memorial Fund.