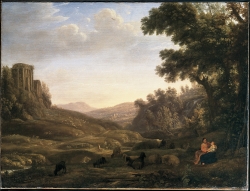 Both "Mystery of Love" by Donna Summer and the painting have the basic theme of two people falling in love (the song makes the lovers unidentifiable, while the painting uses a shepherd and a shepherdess). The song makes sure to use the verse "Innocent dreamers turning the wheels of chance" to reference the unknown fate of the two lovers. Will they progress in their relationship or break up? The painting does not address the shepherd and shepherdess's fate either, so anything could potentially happen.

Also, the song uses lyrics to address design choices shown in the painting. For example, the verse "star-crossed in time in a place" references the idea that love could occur in any time and any place. The shepherd and shepherdess are meeting in a grassy field away from civilization, with Roman ruins lying in the background, indicating that love knows no bounds.

Image: Claude Lorrain, Landscape with a Shepherd and Shepherdess, about 1636, oil on canvas. Purchased through gifts and by exchange; P.989.21. 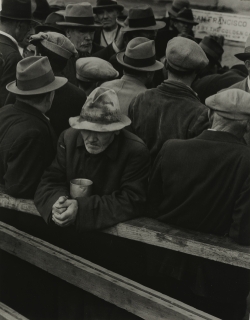 In the museum's print, poor men are collecting bread during the Great Depression, while one man looks the opposite way, leaning over the fence with a pail of food between his hands in a scowling manner. "Nobody Gives" by The Kinks, on the other hand, addresses the theme of people in modern society not trusting or helping each other out anymore. The song uses the poverty strike of 1926 as an example of this theme, where poor and hungry Americans went on strike against the trade unions. In a vicious cycle, the trade unions blamed the workers' poor conditions on the government, who in turn blamed the workers for disrupting the economy. These negative thoughts are formulating in the scowling man's mind as well, since his life is now encompassed by poverty due to the stock market crash of 1929. Furthermore, since the scowling man is facing away from the other people in the picture, he appears to lack the willingness to either trust or work with anyone else to alleviate his pain. 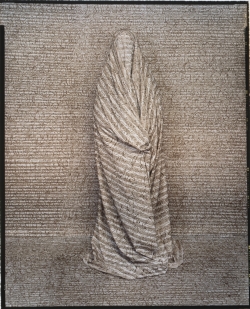 For starters, "The Right to Vote" by Laura Nyro addresses the fact that some patriarchal societies expect women to live their lives in a veil. Also, the main theme of the song is that women have the right to vote, but the choices available to them all lead to unsatisfactory conclusions. This is alluded to in the song with the following verses: "Should I vote for A or B, A talks a lot, but not to me, And B wants war, Kill or flunk."

Furthermore, in the song, men seem to forget that women have the right to vote for beneficial outcomes for society, through the verses: "Thank you, sirs, for the right to vote, Bet you didn't know I had a voice in my throat." I conducted some research in Moroccan voting rights, and women are not able to freely exercise their right to vote and participate in fair elections. This could correspond with the Arabic writing seen throughout the picture, which tries to coerce the woman to accept the status quo. Instead of cowering, the woman acts defiantly by standing upright, using the veil as a shield to protect her body, mind, and spirit from harm.

In conclusion, both the woman in the veil and the women who have the right to vote are striving for the right to own their destiny. They are sick of living in a society that ignores their contributions and voices but implements policies that constantly affect their daily lives. Therefore, both mediums address the steps women can take to get closer to both freedom and power in their own lives.

"Look and Listen" is a collaborative playlist project. Think of how your own favorite songs could fit with a work of art and share a playlist with us on any social media platform by tagging @HoodMuseum or using the hashtag #HoodMuseum.

Written by Arieh Fried, Visitor Services Guide at the Hood Museum of Art