The Laughing Audience (Bill of Sale) 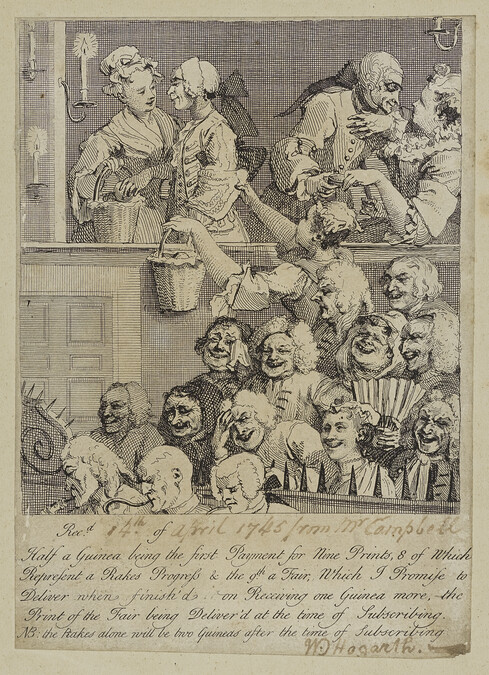 Inscribed, in plate and in ink, lower edge: Rec.d 14th of April 1745 from Mr. Campbell Half a Guinea being the first Payment for Nine Prints, 8 of Which Represent a Rakes Progress & the 9th a Fair, Which I Promise to Deliver when finish'd on Receiving one Guinea more, the Print of the Fair being Deliver'd at the time of Subscribing. NB: the Rakes alone will be two Guineas after the time of Subscribing; signed, in ink, lower right: WD Hogarth

Funny Faces: Selected Satirical Prints and Caricatures from the Permanent Collection, Hood Museum of Art, Dartmouth College, Hanover, New Hampshire, November 1-November 2, 1991 (in conjunction with an interdisciplinary conference, The Faces of Physiognomy, in honor off the 250th anniversary of Lavater's birth. Conference organized by the German Department of Dartmouth College. Exhibition organized by Katherine W. Hart

Hamilton Gibson; given to present collection, 1955.