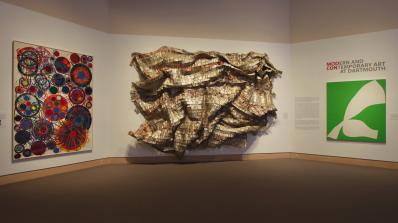 Modern and Contemporary art at Dartmouth

Our language and accent are fundamental elements of how we express and identify who we are, where we come from, and how we relate to one another. Yet, how often do we think about trying to alter our tone, our voice, or our words? Can you think of a time when you might have benefitted from adjusting your accent?

As an artist living and working in Brooklyn, New York, Nina Katchadourian would come across signs advertising “accent elimination” as she walked the city streets. Inspired by the seemingly paradoxical notion of improving one’s accent as a means of assimilation while still attempting to sustain one’s cultural identity, Katchadourian created the multimedia work, aptly titled Accent Elimination.

In it, Katchadourian explores language and identity and questions what an accent is at its core. As she explains:

My foreign-born parents who have lived in the United States for over forty years both have distinctive but hard-to-place accents that I have never been able to imitate correctly (and have not inherited). Inspired by posters advertising courses in “accent elimination,” I worked with my parents and professional speech improvement coach Sam Chwat intensively for several weeks in order to “neutralize” my parents’ accents and then teach each of them to me.

After filming this process of “neutralizing” and “mimicking” one another’s accents, Katchadourian designed a six-channel work in which three television monitors show (1) a synchronized conversation (a script created by her parents) in their natural accents; (2) their practice with changing those accents; and (3) the same conversation in their adjusted accents. Three other monitors show outtakes from their practice sessions. Katchadourian and her parents put a lot of effort into their practice, but no one is overly convincing in the end. Of course, this begs the question: How do we measure the success of something as subjective as an accent? What Nina finds most rewarding are those moments of challenge and confusion that make us stop and question the assumptions we have made.