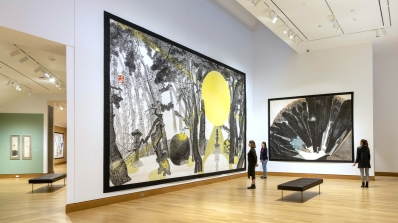 Park Dae Sung (b. 1945) transforms meditative observation into monumental artworks that revitalize traditional Korean brush-and-ink techniques for a modern audience. His paintings couple large scale—several works in the show are more than 25 feet long—with technical finesse, reinterpreting ancient landscapes and objects. Park Dae Sung inspires viewers to engage with the impact of the past on life today. The Hood Museum of Art is delighted to present a major exhibition of his contemporary Korean ink painting, with 23 works, many of which are being shown for the first time in the United States. Park Dae Sung: Ink Reimagined is on view at the Hood Museum from September 24, 2022, through March 19, 2023. Variations of the exhibition will also be presented over the next two years by the Korea Institute, Harvard University; the Charles B. Wang Center, Stony Brook University; and the University of Mary Washington.

This is the largest solo exhibition of Park's work to be shown in the United States and only the third time that the artist will have a US one-person show. The Los Angeles County Museum of Art will present a concurrent eight-work exhibition this year, Park Dae Sung: Virtuous Ink and Contemporary Brush (July 17–December 11, 2022), and in 2015, the Korea Society in New York also hosted a solo presentation of Park's work.

Dartmouth Associate Professor of Art History Sunglim Kim, curator of the exhibition, notes that Ink Reimagined "is a great opportunity for the Dartmouth and Upper Valley communities to meet this world-class artist in person and see his magnificent works firsthand. Park is very humble and deliberate in personality yet passionate and exuberant when engaged with painting. Visitors will see two contrasting characters in his sensitive bird and still life works; long handscroll calligraphy; and bold, energetic, and gigantic landscapes.

"We hope the exhibition will deepen Western understanding of Park's modern style and inspire interest in the long tradition of East Asian ink painting, as well as contemporary Korean art and culture," Kim adds.

Park Dae Sung will be at the Hood Museum of Art on November 3, 5:00–6:00 pm, to discuss his work at the annual Dr. Allen W. Root Contemporary Distinguished Art Lectureship. This will be followed by a full-day symposium about Korean contemporary art on Friday, November 4, co-organized by Dartmouth College, the Korea Foundation, and the MMCA (Museum of Modern and Contemporary Art, Korea). Both events are open to the public.

Featuring works that rethink landscape, still life, modernity, and tradition, Ink Reimagined captures the essence of Park's practice. The exhibition is organized into four sections: Landscapes, Birds and Animals, Still Life, and Calligraphy. It inspires a deeper contemplation of traditional East Asian art and the diversity of styles— meditative, dramatic, tranquil, and powerful—within in the medium of ink. Park's work offers viewers a newfound understanding of what it means to find beauty in what is old, as well as a fresh perspective upon humanity's contemporary relationships with nature, identity, and homeland. His scenes present an imaginative reinterpretation of history that, in turn, encourages a more progressive and stirring vision of the future.

Park Dae Sung was born in 1945, the year that marked Korea's independence from Japanese colonization and the end of World War II. Even in the remote city of Cheongdo where he lived, Park was not spared the grip of the Korean War, which began in 1950. Park lost both his parents and his left arm during an attack by North Korean sympathizers, which left him physically disabled and marginalized by his peers. His formal education ended shortly thereafter, and he turned to painting and calligraphy as a source of solace while confronting the hostility of the world around him. Such adversity at a young age informed Park's creative philosophy later in life. He states, "When the body is uncomfortable, the mind does not become sluggish and is awake. I became who I am because of my disabled arm, so I refrain from being (too) comfortable."

In East Asia, calligraphy and painting were traditionally viewed as having the same origin in the media of ink and paper, with the two respective practices embodying what was perceived as fine art. In the twentieth century, the view of painting and calligraphy as an intertwined practice was abandoned, but Park rebels against this separation, creating artworks whose philosophical core lies in their combination. The practice of ink-and-wash painting involves carbon-based black ink applied to paper or silk, with meticulous attention to technique and the rendering of lines. Unlike the opaque paintings with which Western audiences are more familiar, Park's ink is a notoriously unforgiving medium—all the brushstrokes are final and unchangeable, and stroke thickness, type, darkness, and texture all contribute to the works' expressiveness. Park's paintings represent the breadth of possibility in East Asian ink painting, with some featuring powerful, bursting lines and others being hyperrealistic and detailed.

Korean ink painting (hangukhwa) traditionally prioritized the use of shape and line in ink to depict scenery that was not real but rather so idyllic that viewers might wish to imagine themselves there. Scholars believed that painting and calligraphy should channel the artist's creativity and inner being, a "landscape of the mind," rather than simply depict the world. Although Park's artistic career began with daily calligraphic practice and the imitation of work by earlier Korean masters, his landscapes became novel because they represented imagined ideals through direct observation. He evokes the mood of the land around him while still capturing a unique Korean sense of abstraction.

In his monumental painting Magnificent View of Samneung—measuring 13 × 16 feet—which depicts his garden in Gyeongju, tree trunks float above the ground, fading into a pale background of fog. The forest is interrupted by stone pagodas that lend a contemplative air to the whole scene, while a bright yellow ball of moonlight hovers overhead. The carefully rendered brushstrokes give the illusion of looking through a window into the garden, though it is only ink and wash.

Park Dae Sung: Ink Reimagined is organized by the Hood Museum of Art, Dartmouth. The organizers are grateful for the special support of the Gana Foundation for Arts and Culture, as well as the generous support of the Korea Foundation and the Jack and Dorothy Byrne Foundation.

A fully illustrated catalogue titled Park Dae Sung: Ink Reimagined will be published by the Hood Museum of Art and distributed by University of Washington Press. The publication is sponsored by Korean Arts Management Service and Gana Foundation for Arts and Culture. It includes a foreword by Hood Museum director John Stomberg, a preface by Kumja Paik Kim, and essays by Sunglim Kim, Dartmouth College; Jiyeon Kim, Montserrat College of Art; Young Ji Lee, State University of New York Korea-FIT; Suzie Kim, University of Mary Washington; Jinyoung A. Jin, Stony Brook University; and Britta Erickson, INK Studio. It will be available in December 2022.

Park Dae Sung: In His Own Words

The following interview transcriptions have been translated, condensed, and edited for clarity.

"Ink is the soul of Eastern thought. . . . I feel that the medium of ink isn't any specific color—it encompasses all the colors and shades of Eastern thought and philosophy. . . . As you can see in my work, there are different shades of ink. There is the saying in the East that ink is the king of all colors, the only color, if you will, that can never be traced back to the sun. All the other colors we see, like red or yellow or green, can all be traced back to the sun and its reflections. But the process for making ink is to burn trees, and the ashes of the trees are bound together by a particular kind of glue. . . . There is a saying that once ink is used in a work, it will last for a thousand years or maybe 10,000 years."
—"The Paintings of Park Dae Sung," YouTube video, The Korea Society, January 22, 2015.

"I practice Korean traditional art, but the modern age is unlike the past in that the world is closely connected. I have visited Paris, France; Italy; and Beijing, China, often—not to mention Japan. I went abroad many times and explored art around the world, which made me decide which path to pursue. And that choice was to modernize what is most 'Korean.' . . . My works are traditional and contemporary at the same time. In other words, I have modernized a tradition in harmony with the present, though it is true that the tradition is also beautiful on its own."
—Arirang TV, Heart to Heart 2019, ep. 175, "Meokkwa buseuro hangukhwaeui gireul inneun Sosan Park Dae Sung" (Master of Korean Painting, Sosan Park Dae Sung), September 2, 2019.

"From traveling all over the world, from the primitive Himalayas and the Indian Silk Road, and then finally to spending over a year in SoHo, New York, I began absorbing the contemporary and modern. Then I thought, why not try to use different styles and techniques in one painting? I have control of the brushstrokes; that's what I've been doing. I didn't want to do some awkward thing like Westernizing my art or such. So, that is how I modernized my work, by using different techniques in just one painting."
—Interview between Park Dae Sung and Britta Erickson, September 18, 2019, Los Angeles County Museum of Art.

"I have believed that taking my time and putting in effort over a long period can have a tremendous impact. This is what I think. In my early and middle years, I felt I was unlucky. But now, I believe I'm very blessed. That's because in Asia, paper, brushes, and ink are considered world treasures. I believe that even in the modern civilized society, there's no other treasure except for them. I'm very blessed as I've been able to play with such treasures for a lifetime, and these treasures have centered my mind."
—Arirang TV, Heart to Heart 2019, ep. 175.