The Art of Fan Tchunpi

Between Tradition and Modernity
September 07, 2013, through December 08, 2013
This exhibition explores the extraordinary life and work of Fan Tchunpi (1898–1986), one of the most important and prolific Chinese artists of the modern era. As the first solo exhibition of the artist's work since her 1984 retrospective at the Musée Cernuschi (Asian Art Museum) in Paris, Between Tradition and Modernity examines Fan Tchunpi's search for an artistic language that would speak for the self and the nation in an age of crisis, war, and revolution. The oil paintings, works on paper, and ceramics on display in this exhibition demonstrate her efforts to create a dynamic synthesis of Chinese and Western artistic traditions and techniques, while also reflecting the turbulent age in which she lived.

The Judith and Joseph Barker Collection of Japanese Prints

The Women of Shin Hanga
April 06, 2013, through July 28, 2013
In an attempt to revive traditional Japanese woodblock prints, artists of the shin hanga (new print) movement were forced to reconcile approaches to female subjects developed over the previous two centuries with the impact of modernity on both women and the arts in early-twentieth-century Japan. To ensure the contemporary relevancy of their work, the subjects they depicted ranged between deeply conservative and highly provocative conceptions of femininity, with demure, self-effacing geisha representing the former and so-called modern girls, known for their Westernized appearance and morally suspect lifestyles, representing the latter. By retaining production methods honed by their predecessors, they cultivated audiences in Japan and America who appreciated the unique legacies of the Japanese woodblock print tradition. These strategies successfully ensured a place for shin hanga depictions of women in an environment where new print media and styles imported from the West competed with Japan's most treasured visual traditions. The results of their efforts are amply apparent in this exhibition. With ninety woodblock prints from the Judith and Joseph Barker Collection, The Women of Shin Hanga showcases two and a half centuries of Japanese print designers' engagement with female subjects. 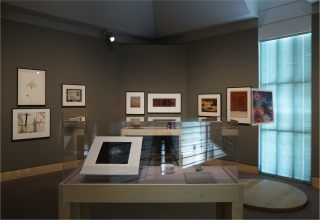 This summer the museum will showcase the gift to the museum of thirty Japanese and Japanese-inspired contemporary prints, drawings, and ceramics by Joanne and Doug Wise, Class of 1959. This exhibition will be organized by students in Professor Joy Kenseth's History of Museums and Collecting (Art History 82), who will choose the themes and arrange the installation. The course, which was taught during the spring term 2012, looked at the history and evolution of art collecting by both museums curators and private individuals. In keeping with this theme, Joanne Wise presented a talk on the shaping of the present collection to the students in the course.

The installation features work by artists such as Keiko Hara, Hachiro Iizuka, Makato Fujimura, and Yutaka Yoshinaga. Joanne and Doug lived in Japan between 1978 and 1982 and began to collect at that time. Upon moving to Houston, Texas, Joanne began to represent Japanese graphic artists and ceramicists and actively promote their work through a quarterly newsletter and her efforts with the Texas Print Alliance. She states: "The Wise Collection exists to bring people of the world together through greater knowledge and appreciation of Japanese art." The Wises gave a portion of their collection to the museum in 2010, and it has been used ever since for teaching students about Japanese printmaking and drawing. 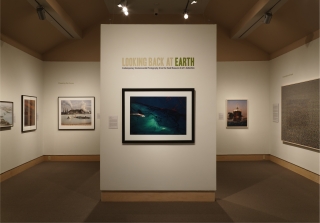 Environmental Photography from the Hood Museum of Art

Looking Back at Earth
July 07, 2012, through August 26, 2012
This exhibition showcases photography that goes beyond landscape to engage with issues of the earth and its environment. It features the work of Subhankar Banerjee, Virginia Beahan, Daniel Beltrá, Diane Burko, J. Henry Fair, Emmet Gowin, Patricia MacDonald, David Maisel, and Ian Teh, among others. Its themes include consumption and waste, industrial pollution, urban sprawl, unsustainable farming, and climate change and its effects on the Arctic. 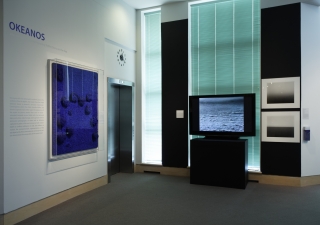 Okeanos, International + Contemporary Relflections on the Sea
March 12, 2011, through May 08, 2011
For anyone who has witnessed its sublimity, above the surface or at its depths, the ocean (from Greek “okeanos”) leaves a powerful, sensuous impression. Contemporary artists Yves Klein, Jennifer Moller, and Hiroshi Sugimoto each reflect upon the experience of ocean via distinct media: Klein with his hyper-saturated, textured canvas; Moller with her darkened, black and white video footage; and Sugimoto with his abstracted photographs of water and air.  Whether captured in paint or film, or concentrating on water’s depth or surface, substance or void, stillness or motion, the monochromatic representations of sea depicted by each of the international contemporary artists in this exhibition demonstrate that the experience of ocean is universal.